15 Children Killed in Another School Bus Accident in China 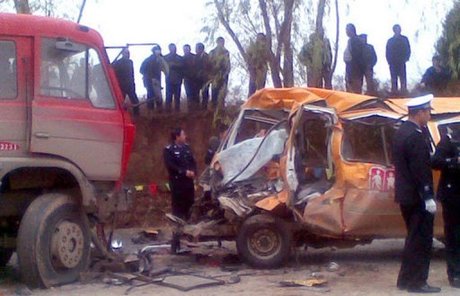 Workers at a nearby factory heard cries for help and rushed to the overturned bus, broke open the windows and began pulling children out.

At least 15 children died and eight others were injured, one of them seriously, said a spokesman for the Jiangsu provincial government, who like many Chinese officials refused to give his name. The official Xinhua News Agency said Tuesday the bus was carrying 29 students and was designed for 52 people, so was not overloaded.

The accident occurred Monday evening as the bus was traveling along a rural highway outside the city of Xuzhou in the province's north. News reports said it careened off the road after swerving to avoid a pedicab. Xinhua said the driver had been detained for investigation.

"My husband ... used one hand to grab two or three (children) and the other to grab another two or three," said the wife of Tian Shengwei, who owns a nearby food processing factory.

"The water was not very deep, probably more than a meter (yard) or so, up to an adult's waist, but it was deep enough to drown some of the children," said Tian's wife, who would give only her surname, Zhang.

"We tried so hard and cracked open one of the windows and started to pull the kids out. It was freezing cold," she said by phone.

She said the children ranged in age from six to about 14.

The crash comes amid an emotional national discussion over the poor condition of Chinese school buses and chronic underfunding of public schools, particularly in rural areas which have lagged far behind cities over the past three decades of rapid economic development.

On Monday, a school bus was hit by a truck in southern Guangdong province, injuring 37 of the 59 students on board, Xinhua reported. Police detained the two drivers.

Last month, 19 children and two adults were killed when a nine-seat private kindergarten van packed with 62 students crashed head-on with a truck in northwest Gansu province.

That was followed by a high-profile pledge from Premier Wen Jiabao that new rules to ensure school bus safety would be drafted within a month. Wen said central and local governments would bear the cost of bringing often-shoddy buses up to standard.

New regulations proposed Sunday by China's Cabinet provide guidelines such as forbidding private vehicles from overtaking buses when students are getting on or off, but do not address to what extent the government will fund school transport.

Many school buses are operated by car rental companies and even co-financed by parents.