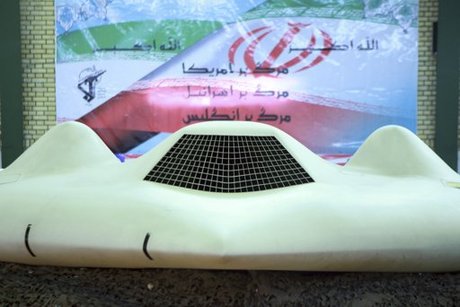 A U.S. drone captured by Iran is now the "property" of the Islamic republic, Defense Minister Ahmad Vahidi said Tuesday, after a request by U.S. President Barack Obama for its return.

"The American espionage drone is now Iran's property, and our country will decide what steps to take regarding it," Vahidi was quoted as saying by the ISNA news agency.

"Instead of apologizing to the Iranian nation, it (the United States) is brazenly asking for the drone back," Vahidi also said, according to another news agency, Mehr.

Obama on Monday acknowledged that Iran was holding the reconnaissance drone -- a bat-winged RQ-170 Sentinel -- by saying: "We've asked for it back. We'll see how the Iranians respond."

"It seem he (Obama) has forgotten that Iran's airspace was violated, spying operations were undertaken, international laws were violated and that Iran's internal affairs were interfered with," spokesman Ramin Mehmanparast said in his regular media briefing, according to Fars news agency.

"Instead of an official apology and admitting to this violation, they are making this request," he said.

Iran last week displayed on state television what it said was the drone. A lawmaker said the Islamic republic was unlocking the aircraft's software and was going to reverse-engineer the drone.

You filthy bastad, people like you bring shame to our country & to make it worse you put the Lebanese flag as an emblem. go take your Hanson & go to your motherland Iran before it's too late. you are going down very soon.

Sergio you are the one who brings shame to our country not Mowaten. You obviously seem like a traiter / hater and talking to you would be a waste of time so i'd stick to that only.

The Iranians are so gullible. They have the Stunex computer virus infecting their nuclear computers and now they have this American drone that dropped into their laps and they think they have something! HA.
Don't the read history. Ever heard of the Trojan Horse? Ever think that the real thing has a self destruct mechanism built in to it just in case it falls into enemy hands? The US is not so stupid as the Iranians think.

So Iran will take this thing apart copy it and build one of their own. Except it is defective and we know it so that it puts Iranian drone capacity back decades, just like their nuclear programs.

The US is laughing up its sleeve that the Iranians have fallen for this! Ha!

Careful around these drones they can blow up!

@ mowaten is that what you hezzi's call each other? we all know that soon you @ your rotten turbunator hassouni will run to Iran & btw don't. forget to take the rest of your gang along with you. like berri etc... time is ticking take him because Lebanese people are fed up with you, your lies & your terror yes & I will repeat it again you non Lebanese. you guys bring nothing but shame & problem to ourbeloved'Lebanon you filthy Iranian bastad. run before it'S TOO LATE.

Wlek ya mowaten we don't like Hezbollah and Iran and the Syrian regime because they want to keep us in a constant state of war with Israel. Many of us don't want war with Israel. And some of us (like me) actually want our government to sit down with Israel and negotiate a just peace and get on with our lives.

Tell me what is this obsession with Israel? They are not occupying our country anymore and they just want to be left alone to get on with their lives as well. As with the Palestinians: sorry for being selfish, but I'm tired of Hezbollah & Co sacrificing my country and the future of my children for the Palestinian cause, when no other Arab government is lifting a finger beyond lip service. There is a Palestinian government: let it try to solve this issue with Israel and let us stay out of this.The Palestinians can stay in Lebanon until this is resolved.

I'm a traitor for not accepting the prospect of an eternal conflict with Israel and calling for peace negotiations with it?

The can have the plane.. but they dont have the manual lol

The Political side concerns the Americans and the Iranians...the Technological part of this story interest every engineer and knowledge seeker... Except the Lebanese who knows everything and disqualify everyone...The Lebanese have this embarrassing behavior of showing off while they are spreading chaos and corruption...The phony and fraudulent concept of smart Lebanese should be removed from our culture...
From a scientific point of view i have high respect for Iranians who are reflecting the ingenuity of their Persian culture....
As far of the majority of the Lebanese like the idiots above who wrote nonsense and rubbish just to create some noise by saying i am here.....
Pffffffffffffffffffffffffffffffffffffffff
MrBrain

This is Hollywood baby. WE let you have that drone. Ask yourself why? hmhm?How about this idea. I bet the paint on the plane is traceable. So I'm thinking be careful of what you think you got.