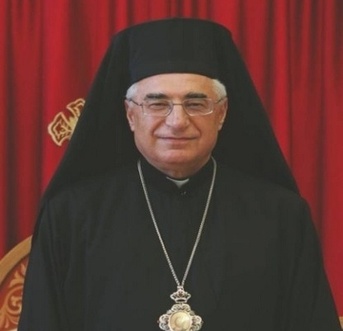 The Melkite Greek Catholic Synod has been convening since Monday at the Patriarchate's summer seat in Aley.

Absi was born on June 20, 1946 in Damascus, Syria. He obtained the Lebanese nationality.

In 1973, he was ordained priest and became Chaplain of the Missionary Society of Saint Paul.

On 22 June 2001, he was appointed Titular Archbishop of Tarsus of Greek Melkites and Curial Bishop and Auxiliary Bishop in the Melkite Patriarchate.

Melkite Patriarchate of Antioch Gregory III Laham, BS, was his consecrator and the co-consecrators were Archbishop Jean Mansour, SMSP, titular archbishop of Apamea in Syria dei Greco-Melkiti and Archbishop Joseph Kallas, SMSP, Archeparch of Beirut and Jbeil, on September 2, 2001.

Since 2007, he has served as Patriarchal Vicar in the Archdiocese of Damascus.