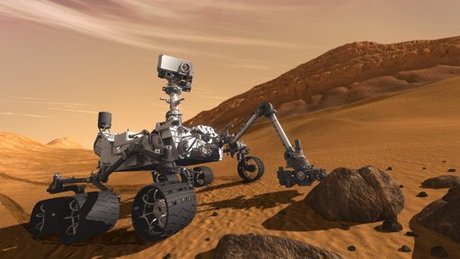 The White House has championed a new era of U.S. leadership in space, but its aspirations are complicated by tight budgets, vacancies in top posts and the rising role of private industry in aerospace innovation, experts say.

During a speech Thursday at NASA's Kennedy Space Center, Vice President Mike Pence delighted hundreds of space agency employees and contractors by pledging that "under President Trump, we will achieve more in space than we ever thought possible," including a "return to the Moon" and "American boots on the face of Mars."

But as the flag-waving enthusiasm faded, some were left wondering what exactly Pence meant.

Larson described a series of recent space-themed orations by Pence as "no cake, just icing."

"I think (Thursday's) speech was, of course, short on substance because there is no substance," Logsdon said.

Some are skeptical of the White House's soaring rhetoric because crucial leadership positions remain unfilled.

For instance, the U.S. space agency set a dubious  record on the Fourth of July: the longest span of time that a newly elected president has gone without naming a new NASA chief.

The previous record was a 164-day stretch in 1971 under President Richard Nixon.

NASA is currently headed by an "acting administrator" -- engineer Robert Lightfoot, who took over when former astronaut Charles Bolden, an Obama appointee, stepped down.

Also empty is the chief of the White House's Office of Science and Technology and Policy, once a key player in crafting NASA's agenda.

It is common for incoming presidents to review their predecessor's space plans and issue a course correction early on.

Although Trump may be late in the process, "he has now created a mechanism for taking a look at the current program," Logsdon explained.

That mechanism is the revival of the National Space Council -- announced last month -- accompanied by an external advisory group of industry experts.

Pence, a long-time space enthusiast, is heading the National Space Council, now in its third iteration after last shutting down in 1993.

The council aims to guide space policy by including the secretaries of state, defense, commerce, transportation and homeland security, along with intelligence and military leaders and the NASA chief.

The council will hold its first meeting before summer is out, Pence said.

After that, the dollars allocated to NASA -- and the projects they fund -- will tell much of the story.

"Any big changes are likely to come next year," Logsdon said.

Trump's proposed budget for NASA -- which has yet to be hammered out by lawmakers -- called for $19.1 billion in spending, a 0.8 percent cut from the previous year.

The proposal canceled plans to drag a small asteroid into orbit around the Moon, where astronauts could study it at length; it also erased several Earth science missions and axed a NASA education office -- but it laid out no new visions.

The next budget for NASA is to be unveiled in February 2018.

"Everybodyis waiting, everybody is impatient in the space community," said Logsdon.

On one side are champions of the old way of doing business, whereby NASA oversaw the building of rockets and spaceships, paid for by lucrative U.S. government contracts.

A modern-day example is aerospace giant Lockheed Martin being paid billions by the U.S. government to construct NASA's Orion deep-space capsule, which may one day carry humans to Mars.

On the other side is the burgeoning private space industry, with players like SpaceX and Boeing building the next generation of spaceships to ferry astronauts to low-Earth orbit and the International Space Station.

Already, SpaceX and another private company, Orbital ATK, have received billion-dollar-plus NASA contracts to help build cargo ships to tote supplies to the orbiting outpost, but the companies took on a large share of the funding -- and the risk -- themselves.

It remains unclear which way of doing business in space will win out under Trump.

His call for the U.S. to exit the Paris climate accord angered the CEO of SpaceX, Elon Musk, who walked away from his advisory role to the president after the announcement earlier this year.

But analysts doubt that SpaceX -- or other top players -- would refuse a spot at the table when it comes to forging the future of U.S. spaceflight.

Eric Stallmer, president of the Commercial Spaceflight Federation, an industry group, said he was "upbeat" about the new National Space Council.

"I think there is a great role that commercial industry will play in helping shape the national agenda moving forward."