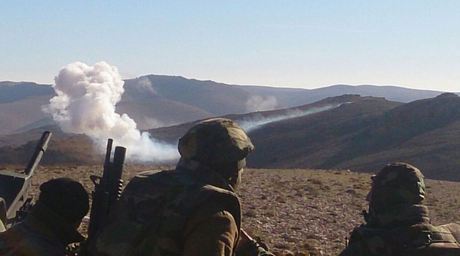 Two terror suspects were killed and three others were arrested in an army raid Tuesday in the northeastern border town of Arsal, the military said.

“In light of security information and as part of the preemptive army plan that led to raiding Arsal encampments on June 30, an Intelligence Directorate force raided a terrorist group at dawn in the town of Arsal,” an army statement said.

The group was “plotting terrorist attacks,” the army added.

A clash ensued when the suspects tried to resist the raiding force, which resulted in the death of “Syrian terrorists Yasser al-Ghawi and Atef al-Jaroudi and the arrest of three others,” the statement said.

“Seven bombs that were ready for detonation, an explosive vest and 50 kilograms of bomb-making material were seized, in addition to a quantity of hand grenades and detonators,” the army added.

It also noted that al-Ghawi was “the mastermind of the bombing that targeted Ras Baalbek on May 22.”

On June 30, the army arrested scores of Syrians during raids in refugee encampments in and around Arsal. Twenty of them remain in custody on terror charges.

Five suicide bombers blew themselves up and other militants hurled grenades during the raids, which resulted in the death of a Syrian child and the wounding of seven soldiers, according to the army.

hopefully, we will hear nassrallah is next so they can keep each other company.

Very good news indeed! Now, the iranian resident rodent of dahieh should be next.

lol, and what has the 'liberation' of Mosul in Iraq got to do with him or Lebanon?

because the terrorist is also in Iraq liberating shabaa farms and jerusalem via Mosul among others.

not enough, they need to lose every one of their filthy terrorists so we can have our country back.

coming from a subhuman who does not recognize the existence of the Lebanese State let alone its army:)!

You never hear the heretics blessing the army when the army arrests a few of their junior drug dealers in the Bekaa.