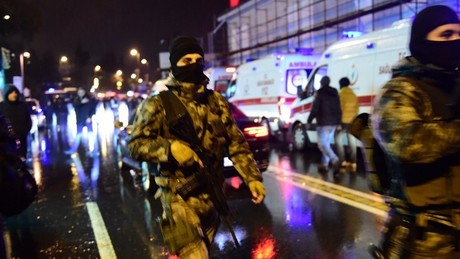 "During the operation, the five terrorists were neutralized after they resisted armed force, and four security forces were lightly injured," the local governor's office said in a statement.

Police also seized weapons during the raid including five Kalashnikovs, a gun and ammunition.

Officers launched raids against IS across 29 different provinces, detaining 233 suspects, the national security headquarters said in a statement.

The raid in Konya took place as part of an investigation into whether the suspects were planning to target events commemorating last year's failed coup on July 15, Dogan news agency said.

The statement did not say whether the five had actually been planning an attack.

Police began the raid shortly after sunrise, targeting a house believed to belong to an IS cell, Dogan said, indicating that they searched a total of 10 separate addresses.

Istanbul security forces captured 25 foreigners intending to go to Syria, the agency reported, adding they would be deported.

Police detained 32 suspected IS members in the Aegean city of Izmir and the southern Turkish city of Mersin, in separate operations on people who had been planning to attack July 15 commemoration events, the agency reported.

Turkey has been hit by a series of attacks in the last 18 months blamed on IS and Kurdish militants.

In a report published on Tuesday, the interior ministry said there had been 14 major terrorist attacks conducted by IS including 10 suicide bombings, one bomb attack and three armed attacks.

The attacks had killed 304 people, including 10 police officers and one soldier.

The last major IS attack was during New Year's Eve celebrations at an elite Istanbul nightclub where a gunman killed 39 people, most of them foreigners.

Police arrested the attacker after a manhunt.

Last week, President Recep Tayyip Erdogan claimed Turkey had killed 3,000 IS terrorists during its operations against the group in northern Syria which ran from August until March.

He also said Turkey had deported 5,000 terror suspects and banned another 53,000 people from entering the country.