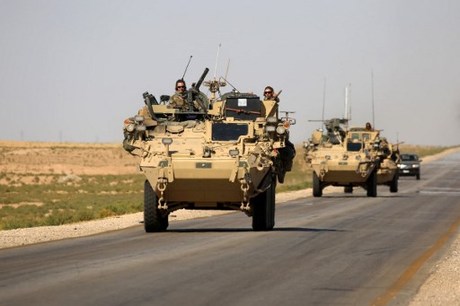 The troops, many of them special operations forces, are working in an "advise, assist and accompany" role to support local fighters from the Syrian Democratic Forces as they battle IS, said Colonel Ryan Dillon, a military spokesman.

The troops are not in a direct combat role but are calling in air strikes and are working closer to the fight than did U.S. forces supporting the Iraqi military in Mosul.

"They are much more exposed to enemy contact than those in Iraq," Dillon said.

He said the numbers of U.S. forces in Raqa were "not hundreds."

The operation to capture Raqa began in November and on June 6 the SDF entered the city.

With help from the U.S.-led coalition, the SDF this month breached an ancient wall by Raqa's Old City, where diehard jihadists are making a last stand.

Dillon said the coalition had seen IS increasingly using commercial drones that have been rigged with explosives. The jihadists employed a similar tactic in Mosul.

"Over the course over the last week or two, it has increased as we've continued to push in closer inside of Raqa city center," he said.

The U.S. military is secretive about exactly how big its footprint is in Syria, but has previously said about 500 special operations fighters are there to train and assist the SDF, an Arab-Kurdish alliance.

Additionally, Marines are operating an artillery battery to help in the Raqa offensive.

"ISIS and USA are allies"

Really GigaHabib aka MoeFan. how old are you? grow up!

the iranian never sleeps; no matter what time of day or night it is he has to post his giga iranian propaganda when duty calls.