Radiohead Set for Israel Concert despite Calls to Boycott 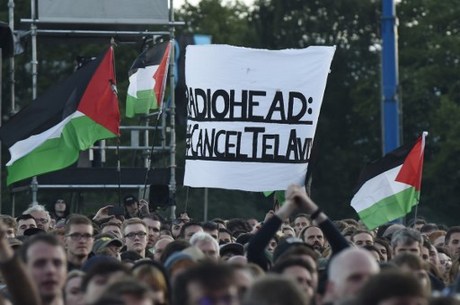 Radiohead is set to defy calls from prominent artists to cancel its concert on Wednesday in Israel over the occupation of Palestinian territory, the latest controversy related to a campaign to boycott the country.

Radiohead singer Thom Yorke has responded to artists such as Pink Floyd's Roger Waters and director Ken Loach calling on the pioneering rock band to cancel, saying such demands have been patronizing.

In a Twitter post last week, Yorke said "playing in a country isn't the same as endorsing its government."

"We've played in Israel for over 20 years through a succession of governments, some more liberal than others. As we have in America. We don't endorse (Israeli Prime Minister Benjamin) Netanyahu any more than (U.S. President Donald) Trump, but we still play in America."

He added that "music, art and academia is about crossing borders not building them, about open minds not closed ones, about shared humanity, dialogue and freedom of expression."

A boycott campaign over Israel's five-decade occupation of Palestinian territory has been under way for years, but Radiohead's concert has received particular attention due to the British band's reputation for political activism.

Band members have spoken out in favor of environmental causes and against what they see as unfair global trade rules.

Radiohead's 2003 album "Hail to the Thief" was seen in part as a response to the George W. Bush presidency in the United States.

Beyond that, it remains one of the world's biggest rock bands, lauded by critics for stretching the boundaries of the genre after first coming to prominence in the 1990s.

Loach, the widely lauded director of politically engaged films such as "The Wind That Shakes the Barley" and "I, Daniel Blake," wrote recently that "if they go to Tel Aviv, they may never live it down."

Israelis tend to rally around artists who defy such boycott calls and the same has been the case with Radiohead.

Concert organizers Naranja say 50,000 tickets have been sold so far for the show at Tel Aviv's Park Hayarkon out of some 51,000 available.

David Brinn, the managing editor of Israel's The Jerusalem Post newspaper who has written extensively on music, said the band already had a large fan base in Israel, so it is difficult to know if the controversy affected sales.

"I don't think that there will be that many people that are going to buy tickets to the show just because Radiohead made a decision to come to Israel," he said, adding that the band's music was "an acquired taste."

The movement behind calls for Radiohead to cancel is known as BDS -- Boycott, Divestment and Sanctions -- and says it is inspired by the campaign that targeted South Africa's apartheid regime.

It is seeking an end to Israel's occupation of the West Bank and activists say bands such as Radiohead essentially cross a picket line when they play in Israel.

Israel sees BDS as a strategic threat and accuses it of anti-Semitism -- a claim activists firmly deny, calling it an attempt to discredit them.

A number of politically active musicians have called off shows in Israel, including Lauryn Hill and Elvis Costello.

But a range of others have performed.

On Saturday night, Guns N' Roses played to an estimated crowd of around 60,000 in Tel Aviv, while others including Britney Spears and Elton John have also performed recently.

Omar Barghouti, a leader in the BDS movement, however spoke of "Radiohead's double standard" in deciding to play.

"They have supported human rights causes elsewhere, but when it came to the Palestinian struggle for freedom, justice and equality, they decided to stubbornly ignore our voices and our appeals, thus helping Israel's propaganda machine to cover up its denial of our human rights," he said.

But for Yorke, it was "patronizing in the extreme" to presume Radiohead is unfamiliar with the Israeli-Palestinian conflict, pointing out that guitarist Jonny Greenwood's wife was born in Israel.

"It's really upsetting that artists I respect think we are not capable of making a moral decision ourselves after all these years," Yorke recently told Rolling Stone magazine.