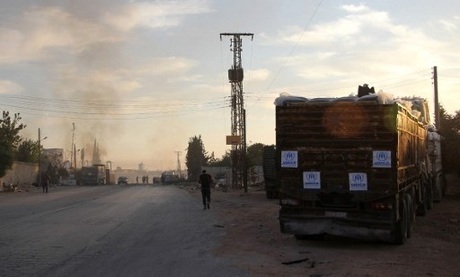 A region besieged by the regime forces east of Syria's capital on Sunday received U.N. aid for the first time in five years, a U.N. source said.

Al-Nashabiye is in the Eastern Ghouta region, a rebel-held area on the outskirts of Damascus that has been ravaged during the six-year conflict.

On July 22, the government declared a ceasefire in parts of the enclave, one of four proposed "de-escalation zones" designated in a deal reached by its allies Iran and Russia and rebel backer Turkey in May.

"This is the first time that a humanitarian convoy has entered al-Nashabiye in five years," a source involved in the U.N. aid delivery said.

The source said food and non-food aid was delivered to 7,200 needy people, days after further aid deliveries in Eastern Ghouta.

Russia said on Tuesday it had delivered more than 10,000 tons of humanitarian aid to the Ghouta area.

More than 330,000 people have been killed in Syria since its conflict broke out in March 2011 with anti-government protests.