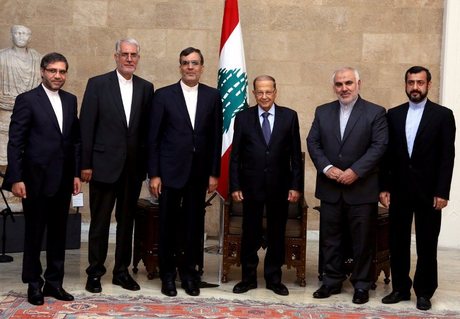 According to the National News Agency, Aoun stressed to Ansari that “the Lebanese stance is firm in terms of refraining from interfering in the domestic affairs of Arab countries and staying away from external conflicts.”

He also told the Iranian visitor that “the Lebanese army is receiving unanimous national support in its war against terrorism, which will soon result in ending the presence of the terrorists in the northeastern border outskirts.”

And hailing “the bilateral ties between Lebanon and the Islamic Republic of Iran,” Aoun promised to visit Tehran at the official invitation that was recently addressed to him after agreeing on its date through diplomatic channels, NNA said.

Ansari for his part relayed to Aoun Iran's congratulations on “the success that the Lebanese army has achieved in ousting the militants of the terrorist Islamic State group from the eastern border's outskirts.”

He also emphasized that Iranian President Hassan Rouhani is keen on “developing bilateral cooperation in the various economic and commercial fields,” lauding “the achievements that have been made during President Aoun's term, especially in terms of extending security and stability across Lebanon and regularizing political life.”

Ansari also held talks with FM Bassil after which he told reporters that the case of Lebanese national Nizar Zakka, who has been held in Iran for around two years, was not addressed in the meeting.

The Iranian official however hoped that “the case will soon be put on the right judicial track.”

Jumblat for his part said he sensed Iran's keenness on "stability on Lebanon and on its diversity" as well as its support for the country's "anti-terror fight on the Lebanese border -- recently by the Resistance and today by the Lebanese army."

"The most important issue that we focused on was addressing Iranian-Arab disputes through dialogue, from Yemen to Iraq to Syria," Jumblat added, saying he and the Iranian visitor also stressed the importance of finding a political solution for Syria.

The Iranian diplomat is also scheduled to hold talks with Speaker Nabih Berri.

but not with the Prime Minister.

I think hariri is avoiding him.... election time is coming soon and hariri needs to rebuild his credibility within his own community; although it won't help him much.

Is someone going to talk with him about the release of the Lebanese guy held in Iran?

Who's next? North Korea's foreign minister?