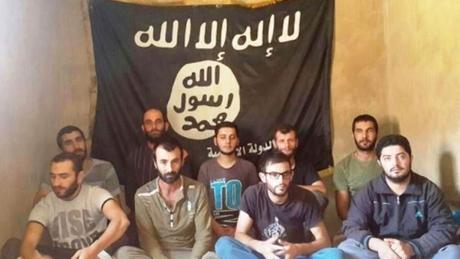 The so-called emir of the Islamic State group in Lebanon’s eastern border region, Mouwaffaq Abu al-Sous, is seeking a mediation that would secure the withdrawal of his embattled militants from the outskirts of Ras Baalbek and al-Qaa to Syria's Deir Ezzor, a media report said on Tuesday.

Al-Akhbar newspaper said that since the Lebanese army started its major anti-IS offensive on Saturday, the besieged jihadist “has been requesting negotiations on daily basis,” telling the Lebanese side, “There is no problem between us and the Lebanese army.”

Abu al-Sous is demanding “a safe route to withdraw to Deir Ezzor, specifically to the city of al-Mayadeen,” al-Akhbar added.

“But the Lebanese side, represented by General Security chief Maj. Gen. Abbas Ibrahim, has rejected the demand, after Abu al-Sous insisted on securing a ceasefire before negotiations, whereas Ibrahim insisted on negotiations under fire,” the daily said.

According to al-Akhbar, Ibrahim also underlined that Lebanon would only negotiate on two points: “offering information on the army's troops who have been kidnapped since August 2014, and surrender.”

The IS “emir” for his part said that he “would not disclose any information about the captives before leaving Lebanese territory.”

The military began its operation in the border region early on Saturday, and has already recaptured more than two thirds of territory in the area.

Security along Lebanon's eastern border with Syria has long been a concern, and in 2014 jihadists invaded the town of Arsal and kidnapped 30 Lebanese soldiers and policemen.

Four were executed by their captors while a fifth died of his wounds.

Sixteen were released by al-Qaida-linked al-Nusra Front in a prisoner swap in December 2015, but another nine solders are believed to remain in IS hands, their fate unknown

Al-Akhbar newspaper is as credible as when @mowateh says he is Lebanese, secular, and has only one account.

It's a pathology and has a name.... it's called mythomania. He requires treatmnet for 'numperous' illnesses.

I believe every word of Al Akhbar disinformation experts.

“But the Lebanese side, represented by General Security chief Maj. Gen. Abbas Ibrahim, has rejected the demand, after Abu al-Sous insisted on securing a ceasefire before negotiations, whereas Ibrahim insisted on negotiations under fire,” the daily said.

so either abbas ibrahim is talking to al akhbar and leaking information that is supposed to be critical and confidential or Al Akhbar has pretty good connections with ISIS. Either way they are a disgrace and a cesspool of filth.

SOS SOS the caveman wants its way down