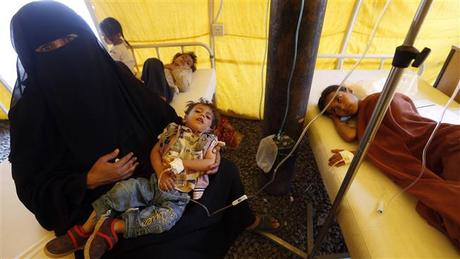 The cholera epidemic tearing through Yemen, exacerbating the already dire humanitarian situation in the war-ravaged country, could impact 850,000 people by the end of the year, the Red Cross warned Wednesday.

The outbreak "has reached colossal proportions," said Robert Mardini, the International Committee of the Red Cross's Near and Middle East director.

The collapse of Yemen's infrastructure after more than two years of war between the Saudi-backed government and Shiite rebels who control the capital Sanaa has allowed the country's cholera epidemic to swell to the largest in the world.

The speed at which cholera is spreading in Yemen has slowed some in recent months, but the deadly waterborne disease is far from contained.

"We are now projecting in the worst-case scenario to reach 850,000 by the end of the year," he said, stressing that "it is not under control. It is not contained."

The World Health Organization said earlier this week that 2,065 people had so far perished from the disease.

"The pace was slowing down a bit, but over the past week it went up again," Mardini said, pointing out that there are still around 4,700 suspected cases being registered in the country every day.

The numbers are all the more tragic in light of the fact that cholera is usually an easily preventable disease.

"It is the worst health crisis for a preventable disease in modern times," Mardini told a conference on the sidelines of the UN Human Rights Council.

WHO has warned that the disease has spread rapidly due to deteriorating hygiene and sanitation conditions, with millions of people cut off from clean water across the country.

Less than half of health facilities in the country are functioning, many health workers have not received salaries for nearly a year, and less than 30 percent of the medicines needed in Yemen are reaching the country, Mardini said.

More than 8,400 people, including civilians and combattants, are believed to have died in Yemen's civil war, according to UN estimates.