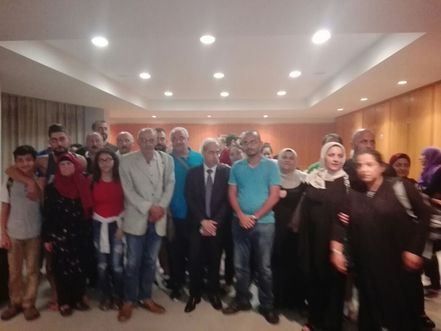 The first batch of Lebanese citizens affected by the devastating Hurricane Irma arrived Sunday morning in Beirut and a second batch was expected to arrive in the afternoon, Prime Minister Saad Hariri's office and the National News Agency said.

The twenty Lebanese citizens, evacuated from the British Virgin Islands, arrived aboard a Turkish Airlines plane coming from London and were received at the Rafik Hariri International Airport by Maj. Gen. Mohammed Kheir, the head of the High Relief Commission, who was representing PM Hariri, in addition to HRC officials and members of their families.

NNA identified the evacuees as members of the Tarabay and Jaber families, saying they hail from the Bekaa towns of al-Bawarej and Lala.

“Ill, fatigued, tired and distressed, the affected Lebanese explained to Maj. Gen. Kheir their tragic situations and what they have suffered as a result of the destructive hurricane that gutted all their properties and the businesses they had established 50 years ago,” NNA said.

Kheir for his part inquired about their needs and relayed to them the salutation of PM Hariri and his concern over their plight.

“He has instructed the High Relief Commission to take all the necessary measures and exert at the needed efforts to evacuate them from the stricken islands and transfer them to Lebanon,” Kheir said.

“The evacuees for their part thanked PM Hariri for his followup on their plight and the promptness of his response, especially that they were the second expat community to be evacuated from the hit island right after the U.S. expat community, despite the difficult transportation circumstances,” the agency added.

It caused widespread and catastrophic damage throughout its long lifetime, particularly in parts of the northeastern Caribbean and the Florida Keys.