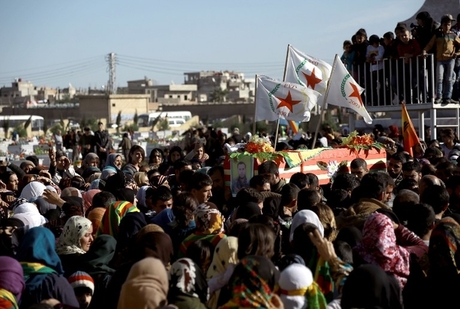 Syria's Kurds are poised to hold their first local elections, a move that has annoyed Damascus and Ankara and comes days before a controversial independence referendum by Iraq's Kurds.

Kurds made up around 15 percent of Syria's pre-war population and were long oppressed by the central government.

But they largely stayed out of the uprising that erupted in March 2011, instead quietly building local control in Kurdish-majority areas after the withdrawal of most government troops.

They have become the key ground force in Syria partnering with the US-led coalition against the Islamic State group.

In March 2016, the Kurds declared three semi-autonomous regions in the areas under their control, part of their push towards the federal system they have advocated in Syria.

Now they are preparing to hold their first elections in the regions, a vote that has angered Turkey and which Damascus has dismissed as "a joke."

The unprecedented election will take place in three stages, beginning Friday with a vote for representatives at the neighbourhood or "commune" level.

Elections for executive councils for towns and regions are planned for November 3.

Then, on January 19, a final phase will elect legislative councils for each of the three regions, as well as a single joint legislative assembly.

- Federalism, not secession -Syrian Kurdish officials insist their goal is not to divide the country, which has been ravaged by a conflict that has killed over 330,000 people.

"These elections are the first step to consolidating the federal system and federal democracy," said Saleh Muslim, head of the Kurdish Democratic Union Party, Syria's most important Kurdish political party.

He distanced Syria's Kurds from the broader ambitions of Kurds in neighbouring Iraq, who have scheduled a September 25 vote on independence over the objections of allies and the central government in Baghdad.

"We are part of Syria," he said. "Our demand in Syria is not separation, our demand is federalism."

Iraq's Kurdish region has been autonomous since 1991, but authorities have long floated the possibility of full independence.

"In Syria, it's the first step, in Iraq it may appear to be the last step. In both cases it's a question of obtaining local and international legitimacy," said Fabrice Balanche, a Syria expert at the Washington Institute think tank.

Kurdish authorities insist the vote will be inclusive, and banners promoting it in Arabic, Kurdish and Syriac have been hung in cities including Qamishli and Amuda.

But Kurdish opposition parties are not expected to participate in the vote, with competition largely between parts of the current administration.

"These elections will be a simulation of democracy, because there is not a multi-party system and freedom," said Balanche, noting that all the parties taking part are "members of a coalition led by the PYD."

"The United States can't but approve of the elections and close its eyes to their non-democratic nature" because of its close alliance with the Kurds in the fight against IS, he added.

For many Syrian Kurds however, the vote is the realisation of an impossible dream after decades of marginalisation.

"I never believed I would see this day."

- 'Illegitimate' -Banners across the Kurdish-majority parts of the country known to Kurds as "Rojava" urge citizens to vote.

"The future of Rojava is in your hands," reads one.

"These elections provide an opportunity for Kurds to start building their institutions for the future," said Kurdish affairs expert Mutlu Civiroglu.

"It is also important for them to show to (the) regime that in northern Syria things are different now and they run the business, not the regime in Damascus."

Damascus has remained relatively quiet on the vote.

"The elections are illegitimate," said Wadah Abed Rabbo, editor-in-chief of Syria's Al-Watan newspaper, which is close to the government.

"Any change to the system in Syria can only be done by changing the constitution, which requires a referendum for all Syrians," he told AFP.

Neighbouring Turkey considers the PYD and its military wing the YPG to be affiliates of the Kurdistan Worker's Party, which Ankara designates a "terrorist" group.

For now, Civiroglu said, that is not the plan.

"Kurds in Syria are not secessionists and they want to remain in a unified, pluralistic, decentralised Syria," he said.

But "they may consider other alternatives if their demands are not met."