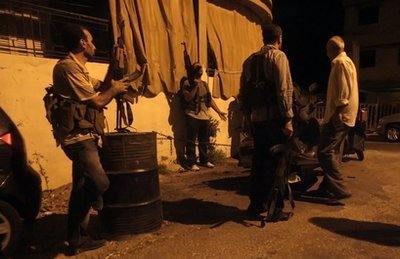 A member of Speaker Nabih Berri’s AMAL Movement was wounded on Friday when a personal dispute erupted into gunfire in the Beirut district of Zaidaniyeh.

“One AMAL member was wounded in the Zaidaniyeh clash and AMAL gunmen have left the area after a brief deployment,” an AMAL official told Naharnet, requesting anonymity.

While the official did not reveal the identity of the other party, Future News television reported that “the clash in Zaidaniyeh erupted after a dispute between two Hizbullah and AMAL supporters.”

LBC television said army troops deployed to the area in a bid to contain the clash which erupted in “al-Itani street in the Zaidaniyeh-Aisha Bakkar area.”

MTV, for its part, said gunmen deployed in Zaidaniyeh “after two people were wounded in an exchange of gunfire.”

Are you sure this is an independent state? Kol ma taraé el kouz bil jarra you have thugs deploying in the streets? Where is the legal authority represented by the FSI? Amal Hezbollah, PNS, same S..t

Oh no......did they say the other party was Hezzbollah? Do they have evidence? What will Qassem say? Will he deny everything and start a law suit?

How dare anyone speculate that the Hezz deployed guns internally!!!!

Throw them in jail.

Deployment, haha, criminals and thugs don't deploy, they just loiter and steal. Time for new resistance time to free us from these fifth and their backward supporters

After Al Sadr Abduction Amal, Under the Leadership of Berri, became a corrupted organization controlled by a “Lawyer” and his entourage...Mr Berri is a pure Sectarian and Feudal Leader who managed to become a billionaire on the expense of his own people...If Al Sadr is found alive Berri will have a heart attack.....
I am not done yet the equivalent organization who has a similar record in the Christian victimized camp is the Lebanese Forces...The difference between Berri and Geagea is that the Former is capitalist and the latter is fascist
Cheers
MrBrain