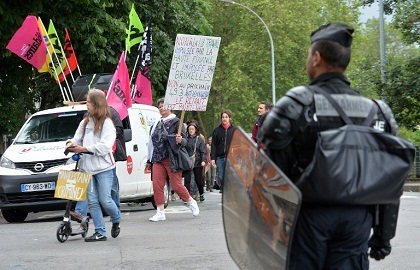 President Emmanuel Macron on Friday signed sweeping changes to France's complex labor code into law, ramming through a landmark reform four months into his administration despite protests from hardline unions.

"The reform... constitutes an unprecedented transformation of our social model (and) the economic functioning of our country," the 39-year-old Macron said, adding that it had been "carried out in record time."

The measures are designed to give employers more flexibility to negotiate pay and conditions with their workers while making it easier and less costly to shed staff.

Macron signed the reform, contained in five executive orders, seated at his desk in the Elysee Palace before television cameras in a U.S.-inspired novelty for a French president.

The overhaul, eagerly awaited by the business community and France's EU partners, was fast-tracked via executive orders as a way of avoiding a prolonged debate in parliament.

The measures chip into worker protections that have long been sacrosanct in France, frustrating reform-minded governments whether on the left or the right.

But Macron insisted Friday that the reform contained "new rights and new protections", such as a provision for higher payouts to workers made redundant.

Three months of negotiations with union leaders produced a split between those willing to compromise -- the CFDT and FO -- and those determined to fight the reforms, led by the largest and most militant union, the CGT.

But the resistance has been weaker than that faced by Macron's Socialist predecessor Francois Hollande over his more limited changes to the labor code, which sparked a wave of sometimes violent protests last year.

On Thursday, some 132,000 people demonstrated across France, just over half the numbers who took part last week in the first major protests to challenge Macron since his election in May.

The CGT has vowed to continue to combat his reforms, while radical left leader Jean-Luc Melenchon wants to get tens of thousands into the streets on Saturday.

Melenchon, the head of the France Unbowed party, has led opposition to the measures, occupying ground vacated by the traditional left and right parties, which have been eclipsed by Macron's centrist Republic on the Move.

But the reform comes as the former investment banker's approval ratings plunge, with recent polls showing that only around 40 percent of French voters are satisfied with his performance.

Protesters have seized upon his recent criticism of opponents to the labor market changes as "slackers", with slogans such as "Watch out, Macron, the slackers are in the street."

CGT leader Philippe Martinez warned Macron: "When you are president, you should show humility rather than strutting about."

Philippe Braud, professor emeritus at Paris's Sciences Po university, said he believed popularity was not a concern for Macron.

"He knows he won't be defeated in the street," Braud told AFP.

Macron insists that his signature reform offers the best cure to France's stubbornly high unemployment rate, which stands at 9.6 percent, roughly twice the levels in Britain or Germany.

"The reform offers pragmatic solutions for very small companies and small and medium-sized businesses... which create the most jobs today," he said Friday.

Public opinion is divided, according to a recent BVA poll, with most respondents saying they think the reform will boost France's competitiveness but fail to improve employees' working conditions.

Critics say the use of executive orders -- which kept parliamentary debate over the proposals to a minimum -- bolster perceptions of Macron as a monarchical or even "pharaonic" leader.

But Macron insists he has a mandate for change after his presidential win in May and his party's thumping parliamentary victory in June.

"Democracy does not happen in the street," Macron said in New York on Wednesday in another broadside at the protesters.

The reform will enter the statute books on Monday, though a few changes, including a measure to streamline workers' committees, will not take effect until the end of the year.