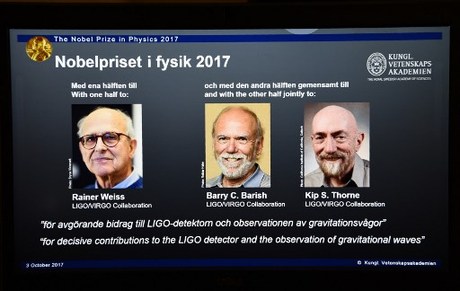 Predicted by Albert Einstein a century ago as part of his theory of general relativity, but only detected in 2015, gravitational waves are "ripples" in the fabric of space-time caused by violent processes such as colliding black holes or the collapse of stellar cores.

Their discovery opens a door on the mysteries of the Universe.

"Their discovery shook the world," said Goran K Hansson, the head of the Swedish Royal Academy of Sciences which selects the Nobel recipients.

Barish, Thorne and Weiss co-created the Laser Interferometer Gravitational-wave Observatory (LIGO) at the prestigious California Institute of Technology, which has taken home 18 Nobels since the prizes were first awarded in 1901.

The first-ever direct observation of gravitational waves was made in September 2015 at LIGO, the result of an event some 1.3 billion light-years away.

Since then, the enigmatic ripples have been detected three more times: twice more by LIGO and once by the Virgo detector located at the European Gravitational Observatory (EGO) in Cascina, Italy.

"Gravitational waves spread at the speed of light, filling the Universe, as Albert Einstein described in his general theory of relativity. They are always created when a mass accelerates, like when an ice-skater pirouettes or a pair of black holes rotate around each other," the Nobel jury explained.

"Einstein was convinced it would never be possible to measure them. The LIGO project's achievement was using a pair of gigantic laser interferometers to measure a change thousands of times smaller than an atomic nucleus, as the gravitational wave passed the Earth."