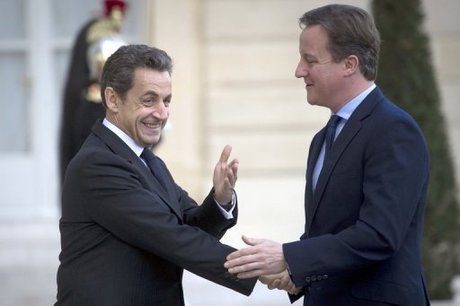 France is giving Britain a "good kicking", deputy premier Nick Clegg said in an interview out Saturday, as the spat over each other's economies rumbled on.

Clegg warned against lurches into xenophobia and chauvinism, the day after telling French Prime Minister Francois Fillon to "calm the rhetoric" as Britain hit back at French criticism of its finances.

The deputy prime minister said it was important to "keep a level head while others are losing theirs", as he vowed to mend bridges in the European Union.

The cross-Channel row comes after Britain clashed with France at a dramatic EU summit last week when British Prime Minister David Cameron refused to join members of the Eurozone currency bloc in a new fiscal pact.

"We all need to go away, have a bit of hiatus, a bit of time to have Christmas, to eat some mince pies or whatever the French equivalent is. Everyone is a bit tired," Clegg told The Guardian newspaper.

The Liberal Democrat leader said Britain may be getting caught in the cross-fire of the French presidential election campaign.

"There is nothing more popular in French politics -- it has always been the case and it will always be so -- than giving 'perfidious Albion' a good kicking from time to time," he said.

"At the end of the day, France and Britain have always worked out it is better to work together rather than shout at each other across the Channel."

The Guardian said Clegg, a Europhile, admitted a repair job was needed to fix relations with Britain's European partners.

He said that "the great genius" of European integration was balancing Britain's "liberal tradition with the French dirigiste tradition".

"The danger at the moment is because society is under economic stress, xenophobia, chauvinism and polarization increase," he warned.

Taking a swipe at "the politics of grievance and blame", he said: "Far from being un-British, I think it is incredibly British -- we are not going to be allowed to be pushed from one extreme to another.

"We are going to keep a level head while others are losing theirs."

With Cameron's backing, Clegg told Fillon on Friday that his comments were "simply unacceptable" after the French statesman told reporters ratings agencies had ignored the state of Britain's economy.

The attack was sparked by a warning from U.S. credit ratings agency Standard and Poor's that it could strip France of its triple-A rating as a result of the Eurozone crisis.

Fitch Ratings on Friday affirmed France's triple-A rating on its debt, but revised its long-term outlook on the rating to "negative" from "stable".

Christian Noyer, the governor of the French central bank, suggested on Thursday that the ratings agencies should consider downgrading Britain instead.

And French Finance Minister Francois Baroin claimed the French economy was in better shape than Britain's.

Analysts said French officials seemed to be trying to deflect attention from the country's own economic concerns.

France even got a mention in a Cameron speech Friday marking the 400th anniversary of the King James Bible, where he called Britain a "Christian country".

"Many people tell me it is much easier to be Jewish or Muslim here in Britain than it is in a secular country like France," he said.

Britain's press waded into the bickering, but warned that the playground spat was getting both sides nowhere.

"There are few more comic spectacles than Frenchmen throwing fits of Gallic pique against the victors of Waterloo," the Daily Mail said.

"And when even the euro fanatical Nick Clegg tells them to back off, it's a sure sign they've gone way over the top."

Calling it the "Entente Glaciale", The Times had a cartoon of French President Nicolas Sarkozy as a cockerel, having its neck wrung and being stuffed by Cameron like a festive turkey.

The Guardian said that "so long as we are all in the same sinking boat, we would be wise to focus on rowing in the same direction".

French cabinet ministers had this week "reduced the cross-channel dialogue to the level of a year-six spat in a playground".

The Daily Mirror also said both countries were as bad as each other.

"Time is running out. Statesmanship, not petty squabbling, is needed to save us from catastrophe," it said.