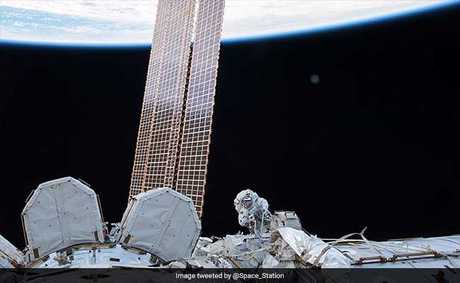 Two U.S. astronauts have installed a high-definition video camera at the International Space Station and made more progress on repairs to the lab's robotic arm, NASA said.

The previous camera had aged, and was tinting images pink. Another camera outside the ISS, nicknamed "Old Yeller" because of its yellow hues, is set to be replaced on the next spacewalk October 18.

The spacewalk was the second in five days for Bresnik and his NASA colleague Mark Vande Hei.

The spacewalk formally began when the duo switched their spacesuits to battery power at 1156 GMT, then floated out into the vacuum of space,  NASA said. It ended six hours and 26 minutes later.

On their spacewalk Thursday, the pair replaced the latching end of the 57-foot-long (17-meter) Canadian-made arm, called Canadarm2.

On Tuesday, they lubricated its latching end effector.

The robotic arm was installed at the orbiting outpost 16 years ago, and recently stopped gripping effectively.

Astronauts need it in working order so it can capture incoming cargo ships that ferry supplies to the crew living in orbit. The next U.S. shipment arrives in November.