Tens of Thousands in Jail as India Prohibition Bites 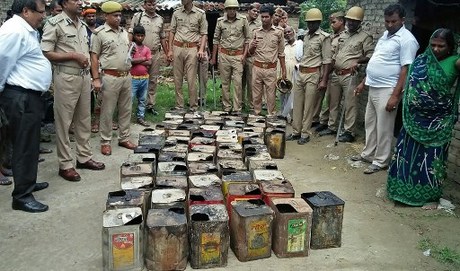 Prem Prakash and his sharp-eyed team cause impatient queues at the border of India's Bihar state where a hard-hitting alcohol ban has left tens of thousands in jail and drawn the national spotlight.

Every rickshaw, every car, every bus crossing from neighboring Jharkand gets a thorough once-over at the Rajauli checkpoint from Superintentent Prakash's excise department team.

Bihar is a big, poor, rough-and-ready state with 100 million people. It also has India's harshest prohibition regime: At least 71,000 people have since been imprisoned for alcohol consumption or possession, some for up to five-years.

It has not been a smooth transition.

While around one million liters of liquor have been seized by police since the legislation was brought in last year, local media report that much of it has disappeared, prompting authorities to investigate.

Officials caused consternation when they blamed rats for consuming some of the alcohol.

Last month, six men accused of selling liquor escaped prison after their guards dozed off. Authorities were forced to deny accusations the guards were drunk.

But while some moan about the effectiveness of the ban and the police tactics used to back it, prohibition has become a vote-winner.

Chief Minister Nitish Kumar, who brought in the Bihar ban, has been praised by conservative Prime Minister Narendra Modi.

"It will protect our future generations and everyone should back him," Modi said in January.

Hartosh Singh Bal, political editor with Caravan magazine, described such bans as "a political quick fix to a complicated problem."

"Alcoholism is a big issue in many poorer Indian households which is why prohibition appeals to a popular base, especially women," he told AFP.

However the alcohol hunters' limited weaponry and the sheer amount of liquor involved makes enforcement difficult.

Superintendent Prakash's team at the border post about 95 miles (150 kilometers) from the Bihar capital, Patna, has to check hundreds of vehicles every day.

"We have caught people giving different reasons for smuggling alcohol including for family weddings, festivals and illegal sale," he told AFP.

One official told AFP that gangs make children carry the contraband as they are less likely to be searched.

Those that live close to the border often go across state lines, and even into Nepal, for drinking day trips.

The political reasoning for the ban is simple: "It's for the poor. You can't imagine how happy this makes them," Kumar said in a speech last year.

"Serious crime is down. Our villages are more peaceful and women's groups say it has helped reduce domestic abuse as men don't come back drunk," he added.

Jhagru Mahto, a Patna taxi driver, says the law has changed his life.

"I used to be an alcoholic but quit fearing arrest and jail after prohibition. My wife is definitely very happy and praises the government," he told AFP.

Bihar's impoverished economy lost about $800 million in annual taxes and revenues after the ban.

"The revenue loss is nothing compared to all the health and social benefits because of this," Aditya Kumar Das, Bihar's excise commissioner explained.

"Women, especially in poorer communities, have been empowered because their men now mostly spend earnings on groceries rather than alcohol," he said.

Yet such claims evoke derision in Musahar Tola, Jehanabad district.

Brothers Mastan and Painter Manjhi used to live in a mud hut -- with their wives, six children and mother -- on a narrow, stinking lane off the main road that leads to a settlement of Musahars (rat eaters), one of India's most marginalized communities.

"The government has never cared about us poor. It was the first time we heard from them when they arrested our husbands," Painter's wife Kranti Devi said.

The family said police action over prohibition had made people like them vulnerable and fearful.

"Forget about their bail, we don't even have the money for our next meals. Can the government provide us that, even if it keeps them locked up?," Devi asked.

Authorities have also been accused of giving inadequate resources to rehabilitating alcoholics.

Media reports have hinted at a flourishing underground drinks network in Bihar, especially Patna, supplying anyone who can pay three or four times market price.

India has had mixed results with alcohol bans. Several states tested the practice after independence from Britain in 1947 but gave up. Only Nagaland and Gujarat enforced total prohibition before Bihar.

Authorities in Kerala, which draws tourists to its tea plantations, lagoons, and sweeping coastline, recently announced a rollback of a controversial alcohol ban announced by the previous state government, citing economic reasons and issues with bootlegging.

In an editorial on the issue The Hindu newspaper said prohibition had not proven to be an "effective check" against alcohol abuse in India.

It said: "It has only criminalized the activity, with disastrous consequences for individual health, the economy and administration."