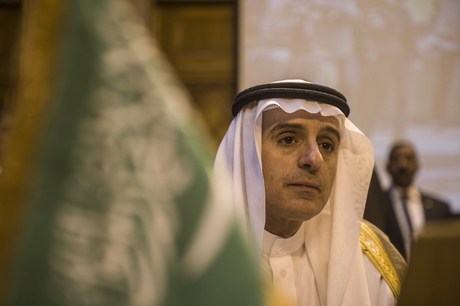 Saudi Foreign Minister Adel al-Jubeir on Monday announced that the latest missile that was fired at Riyadh's international airport was “an Iranian missile, launched by Hizbullah, from territory occupied by the Huthis in Yemen."

"We see this as an act of war," he told CNN. "Iran can not lob missiles at Saudi cities and towns and expect us not to take steps," he added, citing Article 51 of the U.N. Charter.

Al-Jubeir said the missile was made in Iran and smuggled in parts into Yemen, where he claimed "operatives from the Iranian Revolutionary Guards and Hizbullah" helped put it back together again and then launch it.

"This is a very, very hostile act," he said. "We have been extending our hand to Iran since 1979 in friendship, and what we get back is death and destruction."

“The Kingdom of Saudi Arabia will not accept that Lebanon be part of a war on Saudi Arabia,” Sabhan said in a phone interview with Al-Arabiya TV.

“The Lebanese government must understand the threat that Saudi Arabia is facing from those militias,” the Saudi minister added.

He pointed out that Hizbullah “takes part in every act of terrorism against Saudi Arabia,” noting that Riyadh “will use all political means and other means to confront Hizbullah.”

“The Lebanese must choose between peace and submission to Hizbullah,” Sabhan urged.

“We were expecting the Lebanese government to work on reining in Hizbullah,” the minister added, noting that “it is up to the Lebanese to decide how things will turn out with Saudi Arabia.”

“Hariri and the honorable people in Lebanon will not accept the stances of Hizbullah's militias,” the minister stressed, noting that claims that Hariri was “forced to resign” are “lies aimed at distracting the Lebanese.”

“Lebanon is taken hostage by Hizbullah's militias and Iran... and the Lebanese have the ability to put an end to Hizbullah's violations,” Sabhan went on to say.

Saudi Arabia and Iran traded fierce accusations over Yemen earlier on Monday as Riyadh said a rebel missile attack on Riyadh "may amount to an act of war" and Tehran accused its rival of war crimes.

A Saudi-led military coalition battling Tehran-backed rebels in Yemen said it reserved the "right to respond" to the missile attack, calling it a "blatant military aggression by the Iranian regime which may amount to an act of war."

Saudi forces on Saturday intercepted and destroyed the ballistic missile near Riyadh international airport. Yemen's Huthi rebels claimed responsibility for the attack, saying it was in response to deadly Saudi airstrikes in Yemen.

It was the first reported Huthi strike to reach Riyadh and threaten air traffic, underscoring the growing threat posed by the conflict on Saudi Arabia's southern border.

The Ansarullah are strong enough on it's own.
They don't need Hezbollah to fight off the Saudi invasion.

so is assad
so is Malki

Is Saudi Arabia strong without the U.S.A?
Without America you would still be dusty Arabs in the desert.

but Aoun in his inaugural speech assured us that Lebanon remains neutral and does not interfere in arab countries affairs.

may god bless hezbollah aka the lebanese army; the last sanctuary for Lebanon.

the great alies of USA putting a knife in the head of Cristhians in Lebanon!!!??? USA is the greatest support of the extremination of Cristhians in Levant...at the same time USA promoted the expantion in the region of Jews and the Whaabis Salaphists...the USA and Europe of sec. XXI to have in they hands the blood of the extremination of Cristhianity in Levant...USA and Europe of Sec.XXI give the green light for the Jews and the Whaabis Salaphist extreminated the Cristhianity from Lebanon...putting a knife in the Head of Cristhianity in Lebanon after what is happenning in the region...

Naharnet moderators... could you clean your website from all those insults, insulting names, stupid avatars etc... they are neither constructive, nor interessant...

It is about time something is done about this farce/tragedy where the president and his incompetent government keep telling the world Lebanon is neutral and dissociates itself from regional conflicts while hezbollah ( aka the LAF according to Aoun ) is openly engaged in attacks and wars against Arab countries.

I don't know why the Arab nations have been patient with Lebanon so far?

The message is this : any government that has hezbollah in it intent on continuing to pursue iran's objectives would be viewed as hostile towards the gulf countries. However, if hezbollah abides by the Baabda declaration ( which it will not ) then the Gulf states will not have a problem with any future Lebanese government.

I am surprised the Ayatollah of Rockinrolla has not blamed the Yids for this one...at least not yet! lol

Lol, quite a story.