Charbel Says Not all Lebanese will Accept Orthodox Gathering Proposal 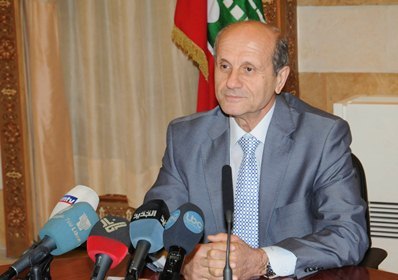 Interior Minister Marwan Charbel stressed on Tuesday that not all the Lebanese factions would approve the Maronite leaders’ decision to back a proposal by the Orthodox Gathering to allow each sect to choose its own representatives during the 2013 parliamentary elections.

In remarks to Voice of Lebanon radio station (93.3), Charbel said that his proposed draft law on proportional representation should be discussed because it has come based on a recommendation from the cabinet and its ministerial statement.

“Not all Lebanese will approve the proposal” of the Maronite leaders, he said.

“In case agreement hasn’t been reached on a draft law, there is another suggestion for a law of holding parliamentary elections in two rounds,” the interior minister told VDL.

“What’s important is to reach an agreement on a law because the old law doesn’t give Christians their rights,” he stressed.

He said the second suggestion on the electoral law calls for allowing each sect to elect its MPs in the first round while paving way for all electorates to participate in the second round according to the results of the first.

And why should all the Lebanese agree on the proposal? When was it that the Lebanese ever agreed on something? Charbel's statement is a non-statement since there will always be dissent on anything anyone proposes in Lebanon.

The idea merits review. One should ditch it only if, after a thorough analysis, the majority of the Lebanese are still not convinced.

Talking about Marwan Charbel, since the day he took the lead of Interior ministry we have witnessed the level of crimes is on a rise! if he has same materials and ressources provided to Baroud earlier, how come he cannot at least maintain the situation at the same rate it was before.... my theory is that he's staying home and someone else running the business on his behalf and owning the game...