Private School in Lebanon Regrets Showing Israel on a Map 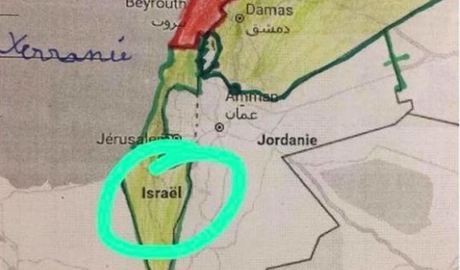 A private French school in Lebanon has issued an apology following complaints from the parents of a fourth grader that a map in geography class shows Israel— and not Palestine— as the country's southern neighbor, violating the law.

Lebanon is technically at war with Israel, and Lebanese laws ban dealing with or recognizing Israel, including showing it on maps.

The private school issued an urgent statement late Wednesday, saying it respects Lebanon's sovereignty and government school programs. The incident came to public attention when the father of a 9-year-old girl posted the map on his Facebook page, saying "this is what my fourth grade daughter learned in class today."

The case gained further attention on the day President Donald Trump declared Jerusalem as the capital of Israel.

Lycée Abdel Kader, belonging to Hariri by the way :D

A school created in 1910... they should be praised for their proactivity.

Not "technically at war."
We are at war with Israel.

And as Naharnet mentioned, it is a crime to support Israel in any way, even showing it on the map.

All commentators here should remember that, if they ever wish to visit Lebanon.

Even the LAF have orders to shoot Israeli invaders on sight, if a new war happens, and Hezbollah will work alongside the Army when that happens, just like they did in Bekaa against the Salafis.

Your protection of Israel against any danger, shows that you are hasbara and you have no business on a Lebanese website.

I'm waiting for them to come in, I swear to God I'll lead them to every single hizbi terrorist house I know of should I see them.

"Article V: 1. The Armistice Demarcation Line should follow the international
boundary between Lebanon and Palestine."

This agreement my friend is annulled by the simple fact that their is no such thing as the International boundary of Palestine. So go figure...the rest is up to your own speculation and argument.

We see that you do not know this file at all.
The demarcation border or blue line is not the international border which was negotiated by the french and british in the 20's and called Paulet Newcombe Line. This is the international border as recognised by the SDN and then the UN
This line gives to Lebanon not only Chebaa but also the Houla plain which was giving by the french in 32 to the british against the opposition of the Lebanese State.

If Israel doesn't exist why does Hezbollah need to be designated as a branch of the Lebanese Army to fight it?

So Hizbullah holds weapons against a State that doesn't exist and is pure imagination ?

And they never fought anyone.... it’s all in their imagination