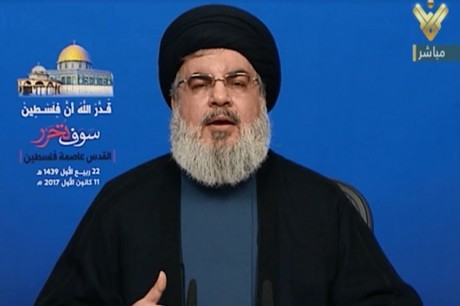 Hizbullah chief Sayyed Hassan Nasrallah announced Monday that the “axis of resistance” in the region will once again focus its attention on the Palestinian cause, as he urged Palestinians to launch a “third intifada” against Israel.

He called on “all resistance factions in the region” and “all those who believe in resistance” to communicate and gather to “devise a plan to confront the aggression.”

“Let us lay out a unified confrontation strategy so that we all confront under a clear and unified strategy. Let us devise a practical and operational plan in which roles would be distributed and efforts would be integrated in this grand confrontation. We in Hizbullah will fully perform our responsibilities in this regard,” Nasrallah said.

Commenting on Trump's decision Hizbullah's leader stated: “In the face of this blatant American-Zionist aggression against Jerusalem, the holy sites and the nation, we reiterate our stance and commitment until victory or martyrdom.”

He said Arab and Islamic governments “must immunize the stances of the European nations that have rejected Trump's decision.”

Nasrallah cautioned “anyone counting on the U.S.” to “realize that it is not a sponsor of peace in the region but rather the creator of Daesh (Islamic State group) and the sponsor of terror, occupation and sedition.”

“The Palestinian Authority should not negotiate with Israel before Trump reverses his decision,” Hizbullah's chief urged.

He also noted that “the most important response to Trump's hostile decision should be the declaration of a third intifada across the occupied Palestinian territories.”

The day this evil iranian sectarian terrorist is violently and brutally murdered is the day we celebrate our true independence.

Axis of Zionism and avatar thief, you must be a mite. They’re the most common thieves.

From a President whose 4 year term of office ended 8 years ago, but refuses to allow new elections.
From Hamas who kill their fellow Gazans for supporting Fatah.
From themselves.

Ofcourse the hasbara Israelis panics and goes to Lebanese websites, whenever they feel endangered.

You stole someones land, now you want to spit them in the face yet again after years of occupation.
Trump did us all a favor, he awakened the Palestinians with this move, now it's a new intifada.

Mitwelians are currently stealing my family’s land in Aramoun. Hizbalot, the terrorist organization is currently occupying Lebanon with its weapons. It destroyed Lebanon by inviting Israel in 2006, then it killed many Lebanese on may 7, it stuck a gun at many officials including my uncle a Lebanese general. Then came Abra , then Arsal... not to mention that the terrorist organization is also behind the political and intellectuals assassinations.

So What differentiates you from zionists in Palestine? Your end will come too. It ain’t going to be pretty.

Through keeping Israel safe right Mystic? this way you act all for Palestine while keeping hands off Israel. loooool an old game being played again by Iran.

Instead of empty speeches why don't you and your iran annihilate Israel as you promised in 7 minutes?

No one has done more harm to Palestine/Jerusalem than this filthy iranian terrorist.

Nasrallah: Today Trump is isolated after his stance on Jerusalem.

Trump lives in the White House, and you live where?

Nasrallah: The most important response to Trump's hostile decision should be the declaration of a third intifada across the occupied Palestinian territories.

what about your response and that of your heroic 'resistance'? ..... I thought so.

Nasrallah Says 'Axis of Resistance' to Focus on Palestine

I see... so what have you been focusing on all these years of fake resistance?

Empty words from a drama queen.