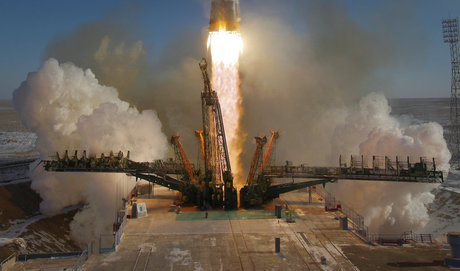 A three-man space crew featuring American and Japanese rookie astronauts as well as an experienced Russian cosmonaut blasted off on Sunday for a six-month mission at the International Space Station.

Scott Tingle of NASA, Anton Shkaplerov of Roscosmos and Norishige Kanai of the Japan Aerospace Exploration Agency powered into the sky in a Soyuz MS-07 spacecraft from the Baikonur cosmodrome in Kazakhstan at 1:21 pm (0721 GMT).

NASA TV footage from inside the Soyuz capsule showed a toy poodle made by Shkaplerov's cousin and modeled on the cosmonaut's family dog floating around the capsule as the spacecraft entered zero gravity.

Roscosmos confirmed the Soyuz crew had launched "successfully" in a Sunday statement on the space agency's website.

While most flights to the ISS now take around six hours, the trio are taking the more circuitous two-day route due to the lab's position in space at the time of the launch.

Docking is expected on Tuesday at 0843 GMT.

Both Tingle, 52, and Kanai, 40, are first-time flyers but flight commander Shkaplerov, 43, is an experienced hand.

The former Russian military pilot has spent exactly a year in space over two missions and will mark his birthday in orbit for the third time in February next year.

Shkaplerov told journalists at a pre-flight press conference on Saturday that he intends to vote from space in Russia's March presidential election, which incumbent Vladimir Putin is widely expected to win.

"We (cosmonauts), like all conscientious citizens of Russia, participate in the presidential elections," he said.

Kanai is the youngest astronaut in the history of the Japanese space agency, and the last of a trio of Japanese astronauts who were certified for travel to the ISS back in 2011.

Japan is not training any more astronauts for ISS missions but announced plans earlier this year to send its first astronaut to the moon by 2030 as part of a NASA-led mission.

U.S. Navy captain Tingle is a graduate of Purdue University in Indiana, which also counts space legend Neil Armstrong among its alumni.

Earlier this week the mechanical engineer tweeted a photo of a rosy dawn emerging over the frosty Kazakh steppe in Baikonur as he prepared for his debut mission.

"Sunrise at Baikonur as we head out to the Vehicle Assembly building for our second, and last, fit check!" he wrote.

NASA stopped its own manned launches to the ISS in 2011 but recently moved to increase the crew complement on the U.S. section of the ISS to four as the Russians cut theirs to two in a cost-saving measure announced last year.

The ISS laboratory, a rare example of American and Russian cooperation, has been orbiting Earth at about 28,000 kilometers per hour since 1998.