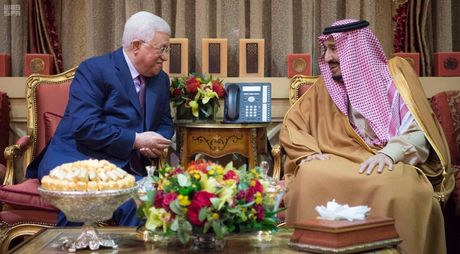 Saudi King Salman on Wednesday pledged the kingdom's support for east Jerusalem as the capital of a future Palestinian state during talks with President Mahmoud Abbas.

The monarch stressed "the legitimate right of the Palestinian people in establishing their independent state with east Jerusalem as its capital," the SPA official news agency reported.

The visit comes after U.S. President Donald Trump earlier this month recognized Jerusalem as the capital of Israel, sparking angry reactions by the Palestinians and Arabs.

On Monday, Abbas reiterated his opposition to any U.S. role as broker between the two sides, saying "whoever allows the United States to return as a partner or mediator in the peace process is crazy."

Abbas has sent delegations to China and Russia to ask them to take a greater role in the peace process with Israel, an official said on Tuesday.