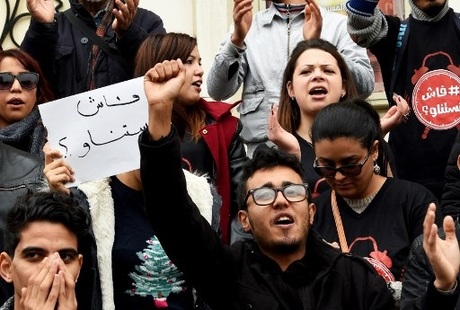 Protests hit several parts of Tunisia where dozens of people were arrested and one man died in unclear circumstances amid anger over rising prices, authorities said Tuesday.

Several buildings were damaged during overnight scuffles with police, the interior ministry said, after activists and political parties denounced new austerity measures expected to increase the cost of living.

Authorities are to carry out an autopsy on Tuesday to determine the cause of death of the 43-year-old man in the town of Tebourba, west of Tunis, spokesmen for the interior and health ministries said.

The interior ministry denied he had been killed by police, saying the man's body showed no sign of any violence. Spokesman Khalifa Chibani said the man suffered from "respiratory problems."

Across the country, 11 officers were wounded including after being hit by stones and Molotov cocktails, while four police vehicles were damaged, National Security chief Walid Ben Hkima said.

He denounced "acts of violence and ransacking."

In the central impoverished city of Kasserine, dozens of youths set tires ablaze and threw stones at members of the security forces, who retaliated with tear gas, an AFP reporter said.

In the central town of Sidi Bouzid, epicenter of the 2011 uprising that unseated dictator Zine El Abidine Ben Ali, rocks and tires blocked the roads, another AFP correspondent said.

An interior ministry spokesman said at least 44 people had been arrested, including 16 in Kasserine and 18 in working-class areas near Tunis.

The unrest "had nothing to do with democracy or social demands", Khalifa Chibani told the Shems FM radio station.

A car pound in Kasserine was ransacked, he said, and buildings of the security forces damaged in the southern town of Hamma.

Several groups called for protests in the Tunis city center on Tuesday starting from midday (1100 GMT).

Protests are common in the North African country in the month of January, when Tunisians mark the anniversary of the 2011 revolt that led to Ben Ali's ouster.

Tensions have been running high seven years since the uprising, including over the new austerity measures implemented on January 1.

On Sunday, Tunisian police dispersed a protest in the capital against the price hikes.

In December, unemployed protesters and activists marched through the streets of Sidi Bouzid angry over the lack of jobs and opportunities that continue to plague the central town.

On December 17, 2010, street vendor Mohamed Bouazizi set himself alight in Sidi Bouzid in a deadly protest over unemployment and police harassment that spiraled into Ben Ali's overthrow.