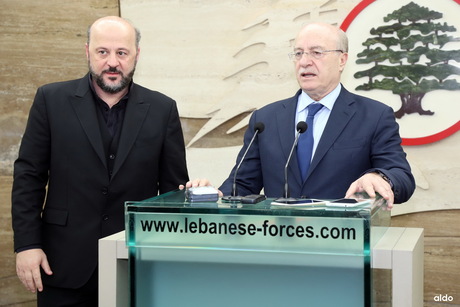 The meeting was held in the presence of Information Minister Melhem Riachi of the LF.

“The visit is aimed at restoring the main channel of communication with Dr. Geagea after a period of interruption that followed the latest crisis in Lebanon,” Khoury said after the talks.

“The visit is also aimed at eliminating all the remnants of the previous period in order to restore the previous status of the Mustaqbal-LF relation,” the minister added, noting that “all issues were discussed, including the government's work and the parliamentary elections.”

Asked what could bring the LF and al-Mustaqbal together at the moment, Khoury said: “I believe that we have agreements at the strategic level as well as in terms of our vision for Lebanon, the state and its policies and the need for dissociating Lebanon from the Middle East crises that are surrounding us.”

Asked whether the two parties will be allied in the upcoming parliamentary elections, the minister noted that “no political force in Lebanon has reached final conclusions regarding its electoral alliances seeing as this new law requires extensive interpretation.”

He however added that “there is no five- or six-party alliance and therefore no party will be isolated, especially the LF.”

Khoury also noted that his visit to Maarab is in itself “a message from PM Hariri to the LF leader.”

Relations between the two long-time allies were strained after some Mustaqbal officials accused the LF of inciting Saudi leaders to press Hariri to resign in November.

The premier announced his resignation on November 4 from the Saudi capital but eventually rescinded it after reaching a deal with the Hizbullah-led camp.

The Mustaqbal-LF row is also linked to Geagea's statement in the wake of Hariri's resignation that the premier should have resigned earlier and that "no self-respecting person would stay in the government after all the events of the past few months."