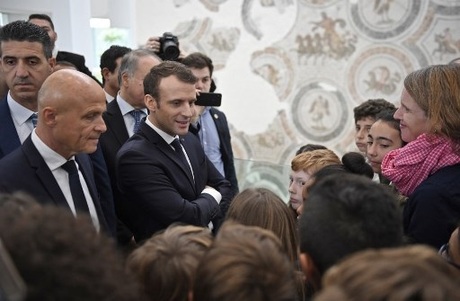 French President Emmanuel Macron has pledged support for Tunisia at an "important moment" for its fragile democracy as he arrived on a first visit two weeks after protests rocked the country.

"We are at an important moment in the life of Tunisia," Macron said at a press conference with his counterpart Beji Caid Essebsi.

Despite a relatively smooth democratic transition, unemployment and corruption remain rife seven years on and new austerity measures adopted at the start of this year sparked a wave of violent protests.

Human Rights Watch on Wednesday demanded an investigation into alleged "abusive treatment" by the police during the demonstrations.

"In trying to quell the social protests that gripped much of Tunisia during January 2018, police sometimes beat those arrested and denied their right to a lawyer," the New York-based group said.

Essebsi sought to downplay the criticism of the authorities by insisting that Tunisia remained a "democratic country" and should not be condemned "in the same ranks as the despots and tyrants."

"You should not judge us as if we were a democracy that been going for centuries," he said.

Analysts say the Tunisian public is skeptical towards pledges of overseas aid.

"They are not expecting much from foreign officials' promises of support, which they only half believe," said Tunisian political scientist Selim Kharrat.

"In 2011, we were promised a Marshall Plan and exceptional aid, which never arrived."

More recent promises "were rarely followed by facts that were palpable on the ground," he added.

Successive governments have struggled to revitalize Tunisia's economy since 2011, especially after deadly jihadist attacks in 2015 dealt a major blow to the key tourism sector.

Tunis did secure a 2.4-billion-euro ($2.9-billion) IMF loan in return for a reduction in its budget deficit and other financial reforms.

But employment has remained stubbornly high, and an austerity budget and hikes in value added taxes sent demonstrators onto the streets in early January.

France has said it wants to help Tunisia tackle joblessness, which remains above 15 percent overall and over 30 percent among the young, despite a slight uptick in economic growth last year.

Paris has also called on French firms to "invest massively" in Tunisia.

Macron in addition signed a deal on closer counter-terrorism cooperation and is due to visit the National Bardo Museum, the site of a deadly Islamic State group attack in 2015.

The French leader will address the People's Assembly on Thursday as well as meeting officials, civil society leaders and members of the public.