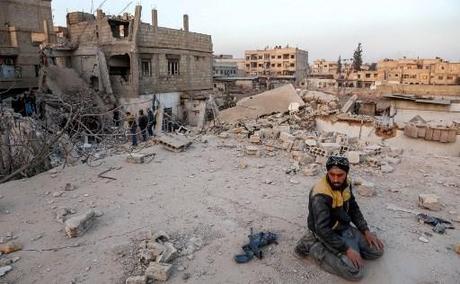 Fresh regime strikes killed 15 civilians Wednesday in a rebel-held enclave near Damascus where overwhelmed medics were still treating the survivors of the Syrian conflict's bloodiest day in months.

The district of Eastern Ghouta, controlled by jihadist and rebel factions, suffered some of its worst bloodshed in years Tuesday and the toll continued to mount overnight.

"This was the highest civilian toll in Syria in nearly nine months, and one of the bloodiest days for Eastern Ghouta in several years," the head of the Britain-based monitoring group told AFP.

Nineteen children and 20 women are among the dead, and around 200 were wounded.

There was no respite for Ghouta residents as regime warplanes returned on Wednesday morning and carried out strikes that killed 15 civilians and wounded dozens.

Civilians had been bracing for more raids as the regime appeared intent on ratcheting up the pressure on Eastern Ghouta, a rebel pocket on the capital's doorstep.

"Please break up all gatherings and clear the streets," blared an announcement from mosque minarets in Douma.

Surrounding areas and villages had been heavily battered by raids on Tuesday, flooding Douma's hospitals with wounded children.

Home to an estimated 400,000 people, the Eastern Ghouta region has been included in a de-escalation deal that was meant to bring calm to several zones across the country.

But bombardment there has increased in recent days, including with suspected chlorine-filled munitions.

On Wednesday, French Foreign Minister Jean-Yves Le Drian said that "all indications" pointed to the Syrian government's use of chlorine weapons in Syria.

"All indications... tell us today that chlorine is being used by the regime at present in Syria," he told BFM television.

Chlorine is suspected of having been used on two occasions this month alone on Eastern Ghouta.

The U.S. State Department said on Monday it had recorded six suspected chemical attacks in Syria in the past 30 days.

Jamraya is home to several military positions and a branch of the Syrian Scientific Studies and Research Center (SSRC), suspected of playing a leading role in chemical weapons production.

An Israeli air strike hit the facility in May 2013.

"This morning, Israeli warplanes fired several missiles from Lebanese airspace on one of our military positions in the Damascus countryside," said an army statement carried by state media.

The Observatory said an arms depot in Jamraya had been hit, but it could not confirm whether research facilities had been damaged.

The United Nations has said it is looking into reports of chemical attacks in Syria, and called on Tuesday for a month-long ceasefire across the country for civilians' sake.

The de-escalation zones, according to the U.N.'s regional humanitarian coordinator for Syria, were not doing enough to stem the violence.

"There is a misperception that de-escalation areas have resulted in peace and stability," Panos Moumtzis told reporters in Beirut.

"Eastern Ghouta is as de-escalation area. If anything, there has been a serious escalation... The conflict in Syria is far from over," Moumtzis said.

The situation had grown more dire than ever before because of the multiple fronts raging at the same time.

"It's the first time -- between Eastern Ghouta, Idlib, Afrin -- we have multiple fronts with people in extreme danger without a view to a solution," he said.

More than 340,000 people have been killed and millions displaced since the conflict in Syria erupted in March 2011.

And the world is idle... the "imperalists" chose Bashar to rule Syria just like they chose Sisi to rule Egypt. These rulers are the Zionists' pick.

"The civilian toll is now 80. Nineteen children and 20 women are among the dead, and around 200 were wounded."

gigahabib
Yes, an al-Jazeera made for TV scifi movie.

Giga is a part of the misguided young youth who glorify war and think that its the ultimate solution for resolving problems in the M.E. hes no different than many others here who think the same way. History has shown us the opposite and that war has not solved anything for the region but coupled with religion has been the largest set back for the growth and advancement. Other far stronger nations around the world have moved forward with their political program and instead use their financial or administrative might to insure they get their issues resolved. Syrias problems will not disappear no matter who shells whom its not over by a long shot.

He's not young, he's at least 35-40. I know this because I sense an old soul... which is sad because we can't blame maturity in his case. He's simply et réellement malade.

Most of the members who subscribe to spreading the anti Lebanese sentiments here are young by nature and misguided by concept. Kizb and its allies pray on these youth and encourages their acts of violence through repetitive conditioning messages about the glory of war and that only through war can they achieve their path forward. A more experienced person would be able to remember back enough to realize that the pictures of the so called dead heroes do nothing but condition people to accept the so called revolt. Hope is that education catches up with the whole nation....