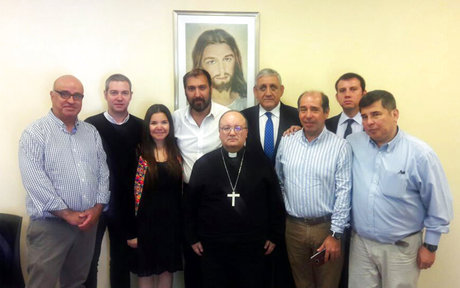 A top Vatican investigator, Archbishop Charles Scicluna, concluded a visit to Chile on Wednesday after meeting with sexual abuse victims in a case that created a major public controversy for Pope Francis.

Francis sent Scicluna to Chile to hear evidence against a bishop who the pope embraced and defended in the face of accusations he had covered up abuses of a pedophile priest.

The prelate, who flies back to the Vatican on Thursday, will "complete a report he will deliver to the Holy Father at an upcoming, undetermined date," church spokesman Jaime Coiro told reporters.

Francis will then decide whether to open a canonical investigation against Bishop Juan Barros, who was accused of covering up and even witnessing the abuses of pedophile priest Fernando Karadima during the 1980s and 1990s.

The pope came to Barros' defense in January while on a trip to Chile, setting off a storm of criticism that questioned his commitment to confronting the abuse scandals.

"The day they bring me proof against Bishop Barros, then I will speak," the pope said in response to a journalist's question.

"There is not a single piece of proof against him. Everything is slander. Is this clear?" Francis said.

Karadima was accused of abusing children in 2010, and convicted by the Vatican to a life of penitence.

Civil charges against him in the Chilean courts were dismissed because of a lack of evidence.

The pope has often spoken out about sexual abuse, and has vowed zero tolerance towards what he has described as a "great humiliation" for the Catholic Church.

But many victims remain bitter over alleged coverups and Church inaction over the years.