Dozens Treated for Breathing Problems after Raids on Syria's Ghouta 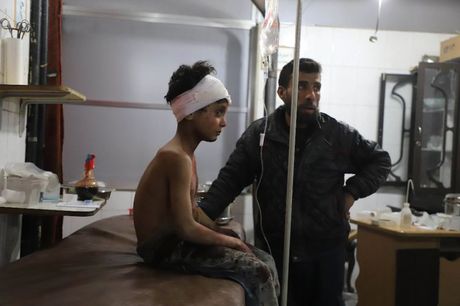 Dozens of people were treated for breathing difficulties after air strikes slammed into Syria's Eastern Ghouta late Wednesday, a monitor said, with medics reporting symptoms consistent with a toxic attack.

The Syrian Observatory for Human Rights said at least 60 people in the besieged rebel enclave were left struggling to breathe after air strikes and barrel bombs hit the towns of Saqba and Hammuriyeh.

Doctors at one medical facility in Eastern Ghouta said they treated at least 29 patients with signs of exposure to chlorine, according to the Syrian American Medical Society (SAMS).

SAMS is a medical charity that supports hospitals in Eastern Ghouta and other rebel-controlled zones in Syria.

It did not report any deaths but said it was likely that more victims were being treated at other clinics.

"The emotional trauma from these attacks can not be measured."

Dyspnea is shortness of breath. Conjunctival erythema is redness of the eye caused by dilation of the blood vessels.

AFP's correspondent in Hammuriyeh saw more than 40 people on the roof of a four-storey building late Wednesday, trying to get fresh air after strikes on their neighbourhood.

Parents had stripped their children down and were spraying them with water, fearing toxic substances had got into their clothes.

- 'I'm going to suffocate' -Rescue workers arrived and transported the residents off the roof to a nearby medical facility even as bombing raged around them.

"I'm going to suffocate," two children screamed repeatedly as they were carried down.

Eastern Ghouta is facing a blistering offensive by Russian-backed government forces and allied militiamen, who are seeking to clear out rebels from the capital's outskirts.

Regime forces have been repeatedly accused of using chlorine on Eastern Ghouta in recent weeks, which both the government and its ally Russia have staunchly denied.

United Nations investigators say government forces used chlorine as a weapon at least three times between 2014 and 2015, as well as sarin gas in 2016.

The latest assault on Eastern Ghouta began with an intense bombing campaign on February 18, followed by a ground offensive.

Government forces have since captured more than half of the rebel-held parts of the area and killed nearly 900 civilians, according to the Britain-based Observatory.

The toll includes at least 91 people killed on Wednesday.

Air strikes continued to hit the remaining rebel-controlled parts of Ghouta on Thursday.

A convoy of humanitarian assistance expected to enter the enclave was postponed, the International Committee of the Red Cross told AFP.

It marks the second time this week that aid operations to Eastern Ghouta have been disrupted by military developments, with food deliveries cut short on Monday due to heavy bombardment.

Wet Shia chick is a poet, an artist. She's good at rhymes. What's your contribution to the forum beside spewing your frustration? There's nothing worse than a mitwelian with an inferiority complex. Lebanon is a sectarian country with a sectarian constitution. If you don't like it, it means you don't like Lebanon. You must be mitwelian with an Iranian agenda wishing to see an Islamic republic here instead.

Takiah is strong with this one!