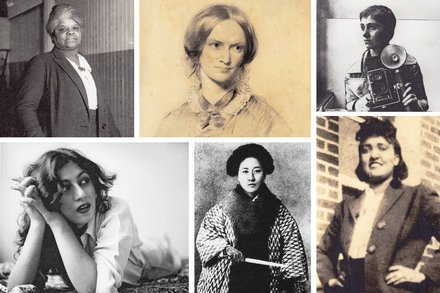 The New York Times published their obituaries on Thursday.

The belated tributes to Bronte, Plath and Arbus were part of a project called "Overlooked" launched by the Times to "provide obituaries to significant women not previously chronicled" by the newspaper.

"Since 1851, obituaries in The New York Times have been dominated by white men. Now, we're adding the stories of 15 remarkable women," the Times said of the project whose launch coincided with International Women's Day.

The newspaper said that in looking back at its archives it found that the "vast majority" of obituaries over the years "chronicled the lives of men, mostly white ones."

"Even in the last two years, just over one in five of our subjects were female," it said.

The Times said "Overlooked" would become a regular feature of the obituaries section.

Besides Bronte, Plath and Arbus, the Times published the obituaries of 12 other women online on Thursday.

They included Ida Wells, an African-American journalist who campaigned against lynching, Qiu Jin, a Chinese feminist poet and revolutionary, and Mary Ewing Outerbridge, who is credited with introducing tennis to the United States in the 1870s.

Among the others profiled were Bollywood star Madhubala and Ada Lovelace, considered the world's first computer programmer.