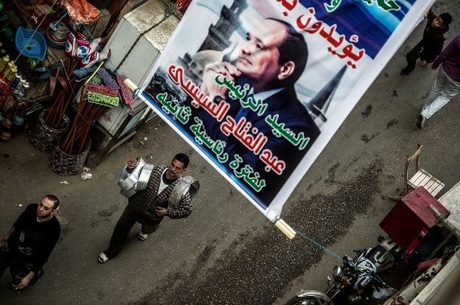 In Cairo's El-Gamaleya neighborhood where Egyptian President Abdel Fattah al-Sisi grew up, residents reeling from rising prices plan to support the incumbent in this month's presidential election despite economic woes.

"I still love him and my trust in him doesn't have a limit," said Mohammed el-Aswad, 46, the owner of a small sock factory next to Sisi's childhood home.

Like Aswad, many residents of the working class neighborhood in the heart of the capital's old city say they will vote to reelect the president in polls set for March 26-28.

The outcome of the election appears set in stone. Sisi, 63, does not face any serious competition, as most of the rival candidates either withdrew or were arrested.

His only opponent, Moussa Mostafa Moussa, was relatively unknown to the general public before announcing his candidacy in late January.

For the first 20 years of his life, former defense minister Sisi lived with his family on the top floor of a four-story building in El-Gamaleya, before moving to the newer Nasr City district on the capital's eastern outskirts.

Here, like many other neighborhoods across the capital, banners supporting the president stretch across streets, hang down the facades of buildings, and are tied to the top of street lights.

The ubiquitous signs of support come despite the pain felt by locals in the district, which now houses small-scale industries, due to an economic reform package introduced by the president after he took power in 2014.

Elected with 96.9 percent of the vote a year after leading the ouster of former Islamist president Mohammad Morsi, Sisi made returning security and economic stability his top priorities.

But inflation has skyrocketed as Cairo carried a major reform package in exchange for a $12 billion (9.75 billion euro) from the International Monetary Fund in 2016, floating its currency and slashing state subsidies.

Like Egypt's international partners, many residents in El-Gamaleya are convinced that Sisi's economic reforms are necessary, despite the rising cost of living.

"We support anyone who will put the country back on its feet," said Sheikh Hassan, as he left a neighborhood mosque where he leads prayer.

The man with a long black beard and white galabeya -- the traditional Egyptian robe -- plans to vote for Sisi but is desperate for some much-needed economic relief.

"We need him to boost the economy because prices have risen and people are exhausted," said.

In a nearby narrow alley where metal workshops sit side-by-side, Mohammed Abdel Fattah coated trinkets in gold paint for a patiently waiting customer.

"I'm going to vote for Sisi. It's true that the president's popularity has dipped, but he's still appreciated," he said.

Just 100 meters away on a crowded street in Khan el-Khalili, Cairo's main touristic bazaar, Mohammed Khaled runs a shop alongside an art store opened decades ago by Sisi's father and uncles, and still being run by a cousin.

Khaled, 56, is enthusiastic about the polls and the prospects for the future.

"Obviously, I will vote again for President Sisi, and I'll bring my children with me," he said.

"I might be exhausted today (by rising prices), but I'm optimistic. I feel that he will bring good with him."