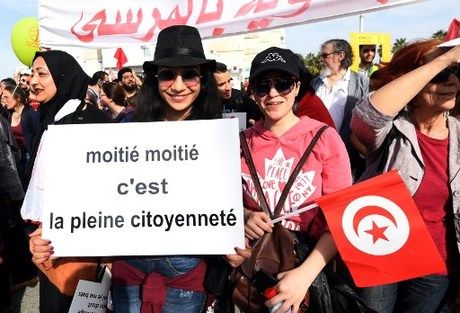 Long seen as a pioneer for women's rights in the Arab world, Tunisia is pushing ahead with reforms promised after its 2011 revolution -- but campaigners say much remains to be done.

The country's 2014 constitution was praised as a key achievement in the revolt that toppled longtime dictator Zine El Abidine Ben Ali and sparked the Arab Spring uprisings.

But much of it has yet to be passed into law, including provisions on gender equality.

Now, moves are afoot on women's political representation, interfaith marriage and the contentious question of inheritance.

A law on violence against women, passed last year, finally came into force in January.

Since September, Tunisian women have been free to marry non-Muslims.

But now a commission set up by President Beji Caid Essebsi to examine "individual liberties" and equality is to tackle a particularly contentious question -- reforms to the country's inheritance laws.

Current legislation, inspired by Islamic law, allocates a man twice the inheritance of a woman.

Women led more than 1,500 demonstrators in Tunis earlier this month to call for equal inheritance rights.

But their demands and Essebsi's moves to change the law have sparked outrage from conservatives.

But Bochra Belhaj Hmida, head of the commission, said "there is a real political will" to change the legislation.

"The president's initiative is likely to be adopted by parliament," she told AFP.

"The role of the politicians is to raise the level of citizens' awareness... It's time," she added. Ennahdha

Laws similar to the current Tunisian legislation apply in many Muslim-majority countries.

In Tunisia, rare opinion polls suggest a majority of people are opposed to equality in inheritance.

But many parents already apply the principle by giving their daughters extra money while they are still alive.

Observers say there is a window of opportunity to change the law ahead of 2019 elections, thanks to Essebsi's current hold on power and the consensus between his party, Nidaa Tounes, and the Islamists of Ennahdha.

But given the subject's sensitivity, the commission has put off publishing its proposals until after municipal elections in May.

Adopted in 1956, the code granted Tunisian women rights that were unprecedented in the Arab world.

"There are elements that are politically favorable towards reform," said Sana Ben Achour, a law professor and feminist campaigner.

"But it's not simple. It touches on heritage that has been passed down for thousands of years."

She said much needed to be done to "rally practicing Muslims" who see equality as contrary to the Koran.

Essebsi's commission is also set to propose changes to laws on family status and passing on nationality to children.