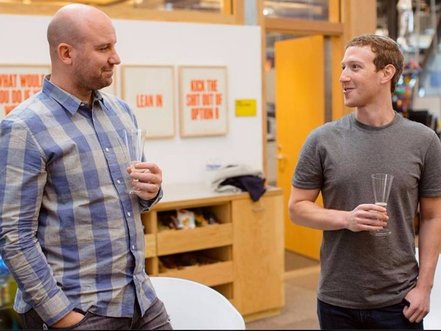 Facebook troubles worsened late Thursday with the leak of a two-year-old memo from a high-ranking executive hinting that the social network was determined to grow despite risks to users.

"The ugly truth is that we believe in connecting people so deeply that anything that allows us to connect more people more often is 'de facto' good," the memo read.

The memo pointed out that connecting people can lead to good outcomes, such as finding love or preventing suicide.

It could also have negative consequences, Bozworth reasoned.

"Maybe it costs a life by exposing someone to bullies," the memo read.

"Maybe someone dies in a terrorist attack coordinated on our tools."

Bozworth is known to be an outspoken defender of Facebook, and unabashed in expressing his views.

"The purpose of this post, like many others I have written internally, was to bring to the surface issues I felt deserved more discussion with the broader company."

In response to an AFP inquiry, Zuckerberg referred to Bozworth as a talented leader who says provocative things, the leaked memo among them.

"This was one that most people at Facebook including myself disagreed with strongly," Zuckerberg said.

"We've never believed the ends justify the means. We recognize that connecting people isn't enough by itself. We also need to work to bring people closer together."

Even if the Bozworth memo was meant solely to get colleagues to grapple with tough issues, it hints that Facebook executives were aware of risks associated with connecting and sharing on the social network.

The leak of the memo came as Facebook continued to be battered by a data breach involving Britain-based Cambridge Analytica, a consulting firm linked to Donald Trump's presidential campaign.

Facebook faces probes on both sides of the Atlantic over the hijacking of 50 million users' personal data by the firm.

The firestorm has raised new awareness on how personal data is stored and shared by internet platforms and marketers.

Facebook has begun to produce documents and wants to be "cooperative" with a New York investigation into the Cambridge Analytica data breach, state attorney general Eric Schneiderman said Thursday.

On Monday, the Federal Trade Commission, a U.S. consumer protection agency, said it had opened an inquiry into Facebook's privacy practices, including whether the company violated an earlier agreement with the FTC on how it handles user data.

Facebook signed a consent decree with the consumer agency in 2011 settling charges that it deceived consumers by telling them they could keep their information on Facebook private, and then allowing it to be shared and made public.