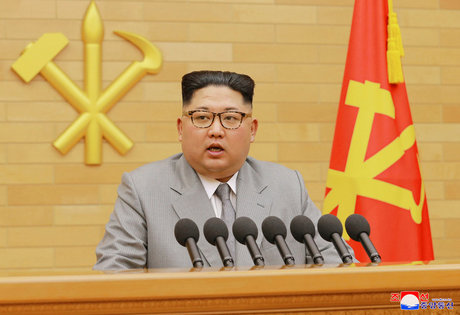 The North Korean leader's surprising move Saturday marks another milestone ahead of his upcoming talks with Trump, who less than a year ago was threatening "fire and fury like the world has never seen" after Kim threatened to strike the U.S. island territory of Guam.

Many North Korea experts greeted Kim's announcement with quick skepticism, noting he signaled no intention of actually disarming, and wondering what concessions the enigmatic leader would now expect from the United States.

"All of the steps Kim has announced are completely reversible and amount to only words and empty promises -- and North Korea is not exactly known to keep its word," said Harry Kazianis, director of defense studies at the Center for the National Interest, a conservative think tank in Washington.

North Korea has not conducted a nuclear test since September and its last ballistic missile launch was in November, but Kazianis cautioned Kim could quickly ramp up again if he does not get what he wants from a summit with South Korean President Moon Jae-in, or at subsequent talks with Trump.

"The international community, therefore, should be hopeful -- but not stupid," Kazianis told AFP.

Several other analysts poured cold water on Pyongyang's statement, saying that while it offered a pause on testing, it recommits North Korea to being a nuclear power, instead of moving it toward denuclearization.

And observers are dubious about trusting North Korean pledges, after decades of broken promises from the hermit regime surrounding its nuclear program.

But Joel Wit, a senior fellow at the US-Korea Institute at Johns Hopkins University who has studied North Korea for decades, expressed frustration with some of the skeptical reaction to Kim's latest move.

He said it is clear that Kim is now intent on pivoting from his nuclear program to modernizing North Korea's economy, and Saturday's statement underscores that.

"I don't know what it will take for people to see this is serious," Wit told AFP.

"These are steps that no one was expecting."

Indeed, it was only in September that Kim was calling "mentally deranged" Trump a "dotard," after the American president labeled the North Korean leader "Rocket Man" on a "suicide mission."

The name-calling came after Trump as a candidate had said he would be open to meeting Kim, later terming him a "smart cookie."

Despite Trump's zig-zagging rhetoric on Kim, Kazianis credited him for his pressure campaign, which has included increasingly tough sanctions backed by the U.N. Security Council and others.

Without Trump's action, "Kim would most likely have already started his normal missile testing several weeks ago, and likely tested another ICBM. This is a significant, but very small, victory for Team Trump," Kazianis said.

Wit too said the Trump administration had "certainly played a part in recent events," but sees North Korea as having a clearer long term plan than the United States.

"These are not just moves from the top of their heads," Wit said of North Korean officials.

Kim's announcement now sets the stage for a better atmosphere for the summits with Moon and Trump, but also puts pressure on the Trump administration to negotiate seriously and try to deliver a positive outcome, he added.

The U.S. is seeking the complete, verifiable and irreversible denuclearization of the North, while according to Moon, Pyongyang wants security guarantees -- potentially leaving much space for disagreement.

The North has long demanded the withdrawal of U.S. troops from the peninsula and an end to its nuclear umbrella over South Korea, something unthinkable in Washington.

Victor Cha, senior adviser and Korea Chair at the Center for Strategic and International Studies, told Axios that the "glaring unanswered question in all of this" is what the U.S. will give in return for North Korea's concessions.

"No one is scrutinizing what the U.S. administration is thinking of giving up --  sanctions? peace treaty? normalization? exercises? missile defense?" he said.