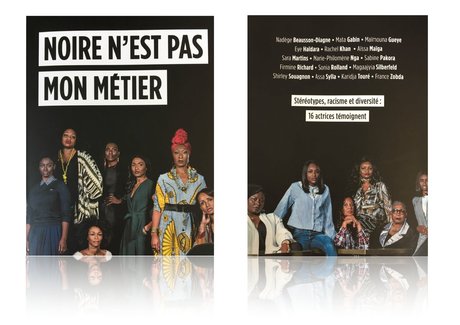 Sick of being typecast as cleaners, prostitutes and delinquents from deprived suburban estates, a group of black and mixed race actresses published a book Friday pillorying the prejudice they have suffered at the hands of the French film industry.

"Being black is not my job" ("Noire n'est pas mon metier"), written by 16 of the country's leading black female actors, recounts some of the everyday racism they have suffered in their work.

"Do you speak African?", "You can't play her, she's a lawyer" and "luckily you have fine features and you are not negroid, not too black..." are among the things that Nadege Beausson-Diagne said she has been told at castings.

The actress, who appeared in France's biggest ever film at the box office, "Welcome to the Sticks" ("Bienvenue chez les Ch'tis"), said she was also told she was "not African enough to be African" and that "for a black, you are really very intelligent. You should have been white."

"French cinema is still very much in thrall to cliches from another time," said Aissa Maiga, the star of "Bamako", who was nominated for a Cesar, a French Oscar, for the 2007 drama.

She said they had enough of "inevitably being referred to as gazelles or panthers", and of being confined almost always to roles that were little more than stereotypes.

"Our presence in French films is still often due to the window dressing of just having a black character," she said.

Maiga said the same lack of diversity ran as deeply through French television and theater. "To have any kind visibility and any length of career (as a black actress) is a miracle, a huge challenge and a scandal," she added.

Although the book does not name names, the 16 actresses -- who will launch the book at the Cannes film festival next week -- said racism is endemic in the French industry.

"It is time to shake up French cinema, to show the real face of our diverse society not just in the casting but in the stories that we tell, and to get over the caricatures of the past," they added in a statement.

"Black Panther" director Ryan Coogler will take on the problems black film-makers and actors face in his masterclass at Cannes next Thursday.

His blockbuster has already beaten the box office record set by "Titanic", and is now the third highest-grossing film of all time.

"There are not that many films about the presence of the black man in American cinema," Cannes director Thierry Fremaux said last month as he launched the festival's line-up. "But there is this ("Black Panther"), and it is a touchstone," he added.