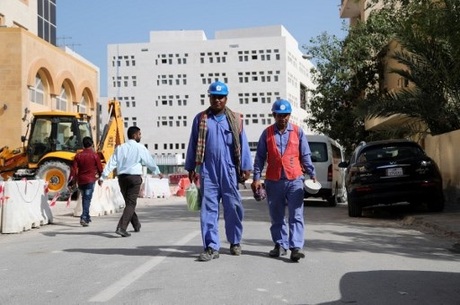 Just a 10-minute drive from the International Labor Organization's new office in the Qatari capital, Nabin explains how his employer has not paid his wages in two months.

He is one of hundreds of workers helping transform Msheireb, a rundown district in Doha, into an area of hotels, luxurious apartments and Qatar's very own "Wall Street" financial centre at a total cost of some $5.5 billion.

The Nepalese laborer should receive 1,100 Qatar riyals a month ($300, 250 euros), but says he has to survive on considerably less -- in one of the world's richest countries.

Like all workers interviewed for this article, the 20-year-old asked to use a pseudonym to protect his identity.

Resting in a patch of shade on the pavement during his lunch break as the midday heat reaches 36 degrees Celsius (97 Fahrenheit), Nabin said with no salary he is unable to buy food.

His is forced to rely on food at his labor camp, where he said he's been served expired chicken.

Nearby, other workers rest after their morning shift, telling of endless problems.

Sumon, a Bangladeshi carpenter, said his company has refused to hand him his residency permit (RP) -- an essential ID card used every day to prove legal residence and required to access anything from telephone contracts to opening a bank account.

He has complained to the courts, but a year on, he is still waiting.

His colleague Ashik recounted how he paid 10,000 riyals -- more than six months' salary -- to his sponsor just to obtain a No Objection Certificate, a document that permits a worker to transfer from one company to another.

He then had to pay another 10,000 riyals to get his new contract, he said.

Several workers complain of harassment from police demanding money from those without RPs.

They say one unlucky colleague was flown straight out of the country when he could not produce his permit.

The International Labor Organization opened its Qatar office on April 29, after signing a three-year agreement with the government to oversee fundamental labor change.

Qatar has come under huge pressure over its treatment of workers since winning the right to host the 2022 World Cup.

Limited reforms have failed to stem criticism from human rights groups and unions which accuse the Gulf state of widespread worker abuse.

Under its agreement with the U.N. agency, Qatar has committed to an overhaul including introducing a minimum wage -- set at 750 riyals per month -- establishing workers' committees, and scrapping the exit visa where workers need their employers' permission to leave the country.

That commitment has split Qatar's critics.

Some, including the International Trade Union Confederation, are fully behind Doha.

Others, including some human rights advocates, remain cautious -- skeptical that reform pledges have remained largely unfulfilled.

Previous promises to end the exit visa system have never been acted upon, according to critics.

The plight of workers in Msheireb echoes the sad stories of numerous workers heard since FIFA handed Qatar the World Cup in 2010.

It also shows that reforms already in place -- including a law ensuring wages are paid in full -- have failed to protect the most vulnerable.

Back in Msheireb, Ashik said those who will be most impacted by the latest reforms have heard nothing about them.

Sumon argues the minimum wage needs to be doubled to 1,500 to allow those building Qatar to enjoy a decent life.

"Everything is difficult because it is so expensive here," he said. "We are here for our families to give a better life to them."

At the end of their lunch break, the workers move slowly back from their resting place in "old" Msheireb to its gleaming new replacement, emerging on the Doha skyline in preparation for the World Cup.

Asked if they have any interest in football, Sumon replied: "No. They will throw us away when this project is finished.

"The football is not for us, it's for different people."