Death Toll from Nipah Virus Outbreak in India Jumps to 10 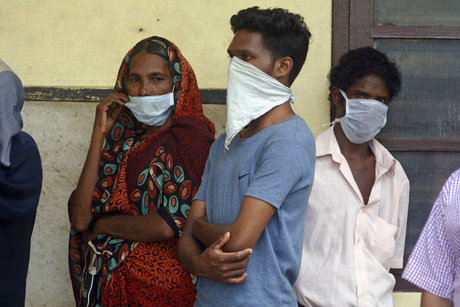 The death toll from an outbreak of the rare Nipah virus in southern India has risen to at least 10, officials said Tuesday, with another 90 people quarantined to try to stem the spread of the disease.

Authorities in Kerala state have ordered emergency measures to control the virus, which is spread by fruit bats.

Three of the fatalities are members of the same family -- dead bats were found in a well at their home.

"We sent 18 samples for testing. Out of these 12 tested positive. Ten of those who tested positive have died and the remaining two are undergoing treatment," a health official in Kerala's Kozhikode district, the center of the outbreak, told AFP.

More than 90 people who have come into contact with those who died have been isolated, authorities said.

Nipah has killed more than 260 people in Malaysia, Bangladesh and India since 1998 and has a mortality rate of nearly 70 percent, according to the World Health Organization.

There is no vaccination for the virus which induces flu-like symptoms that lead to an agonizing encephalitis and coma.

The WHO has named Nipah as one of the eight priority diseases that could cause a global epidemic, alongside Ebola and Zika.

Among the dead in the Kerala outbreak was nursing assistant and mother-of-two Lini Puthussery, who succumbed to the virus after treating Nipah patients.

Puthussery was cremated even before her family members could bid her a final goodbye because of fears the virus could spread.

In a final note she scribbled in a hospital isolation unit, she urged her husband to take care of the children.

"I don't think I will be able to see you again. Sorry. Please take care of our children," she said.

Authorities from Goa and Tamil Nadu states, neighboring Kerala, said they were monitoring the spread of the outbreak.