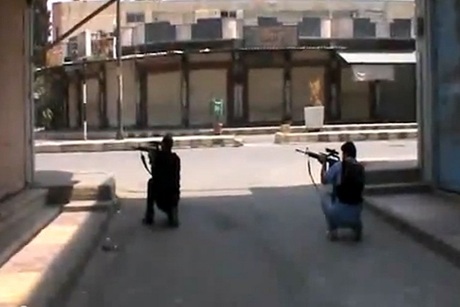 The United States has warned rebels in southern Syria that they should not expect military intervention if government troops launch an assault against them, a rebel commander told AFP Sunday.

Russian-backed government forces are preparing an offensive to retake Syria's southern provinces of Daraa and Sweida, still mostly held by rebels who had been backed by the U.S. for years.

The U.S. warning, contained in an Arabic-language message seen by AFP, came as Syrian troops this week stepped up air strikes on the southern provinces.

"We must clarify our position: we understand that you must make a decision (to fight) based on your interests, the interests of your people and your faction as you see them," the message read.

"You should not base your decision on an assumption or expectation of military intervention from our side," it said, according to a copy provided to AFP by one of the rebels."

The U.S. did not immediately confirm the letter's contents.

On Saturday, Syrian regime forces made their first gains on the ground against rebel fighters in Daraa province after several days of intensified air strikes, according to a war monitor.

The Britain-based Syrian Observatory for Human Rights also reported that Russia late Saturday carried out its first air strike on Daraa since brokering a truce there in mid-2017.

That "de-escalation" deal for southwest Syria was agreed with the United States and Jordan and initially brought some respite to the area, though violations continued.

Those same powers are in talks now to reach a negotiated settlement for the south that could head off a bloody regime assault.

United Nations chief Antonio Guterres on Friday called for "an immediate end to the current military escalation" while Nikky Haley, the U.S. ambassador to the world body, urged Moscow to pressure its Syrian ally to respect the ceasefire.

"We in the U.S. government understand the difficult circumstances you are now facing, and we are still advising the Russians and the Syrian regime not to conduct any military action that will violate the de-escalation zone in southwest Syria," said the U.S. message to rebels.

The opposition commander who received it said it was not in response to a request for help by anti-regime factions.

"We knew anyway that they weren't going to intervene, so we weren't disappointed," he said, speaking on condition of anonymity.

"The letter's contents mean that America will not be able to help the south -- in other words, they are saying 'you're on your own.'"

Earlier this month, Syrian President Bashar al-Assad acknowledged talks over the south but said if they failed loyalists would have "no choice" but to take it by force.

Government forces this year have already recaptured two other areas that were declared "de-escalation zones" in 2017, including Eastern Ghouta outside Damascus and parts of the central Homs province.

letting Geagea and Hariri down!

Hariri the da3ishit is also a Aounit now didn't you hear? His Mustakbal helped Bassil and most of his block get elected. They should tell you this over there in Tehran before they set you loose sounding stupid and repeating stale rhetoric.

apparently letting you down too! don't get upset!, btw.. only losers tend to insult to defend their position, although ignorante.

America has surrendered, thus Hariri and Geagea have to accept the legal reality in Syria although they don't like it. Get it!

ahh! we're talking about Syria and the position of both regarding it and not what is happening in Lebanon... So, although fake-news must be at least coherent and not making fool of yourself