Israel Fires at Drone from Syria, Forces It to Retreat 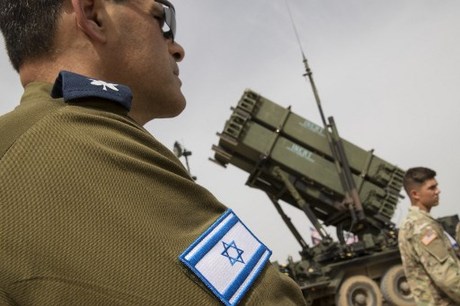 The Israeli air force on Sunday fired a missile at a drone approaching its northern border from Syria, causing it to turn back, the army said.

"A Patriot aerial defense system missile was launched towards an unmanned aerial vehicle approaching the Israeli border from Syria," the army said.

"As a result, the vehicle retreated from the border. A hit was not identified," it said in a statement, noting the drone had not crossed into Israeli territory.

In February, an unmanned aerial vehicle (UAV) identified by Israel as Iranian was launched from Syria into Israel, setting off an escalation during which an Israeli F16 fighter was downed.

The army did not provide further details on Sunday's UAV.

Israel has warned of growing Iranian military presence in neighboring Syria, which it sees as a threat to its safety.

Its military has been carrying out strikes on Iranian and Iran-affiliated targets in Syria, with a U.S. official saying it was Israeli forces that carried out a deadly strike against an Iraqi paramilitary base in eastern Syria on June 17.

Israeli seized a large swathe of the Golan Heights from Syria in the 1967 Six-Day War and later annexed it, in a move never recognized by the international community.

Forces a "retreat" the Jews thinks they are so powerful, only because people feel sorry for their holocaust.

People forget that Hitler was right.

You forget that Hitler got crushed, just like iranian terrorists will be.

Strange, the son of Saba bin Shamoon, a jew, is Abdullah Ibn Saba, the notorious founder of the Shia movement. I thought you'd have more respect for them! you people are ungrateful, your Sayid only exists because of one man, Abdallah ibn Saba. Yet, we real Muslims, the Sunni don't hold any grievances against them because we follow the Qur'an and its teachings. Ahl al Kitab are a red line not to be crossed.

Only yahoudis would argue like you two just did.

Why are Israelis on a Lebanese site?

he has a lot more right to be here than an iranian shia heretic.

inta we7ad mareed! 3ilej, ma fi! at least for you. you've been programmed just like those daesh recruits, there's no salvation for your kind, no deradicalization method can work on weak minds such as yours.