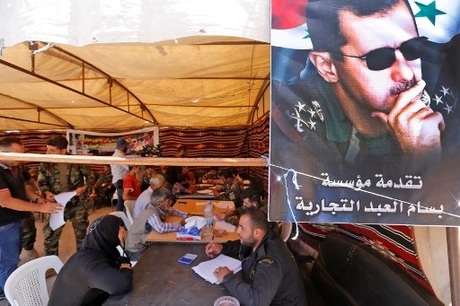 Rebels controlling several towns in southern Syria were on Friday considering a deal for a regime takeover in exchange for an end to fierce bombing, state media and a monitor said.

Since June 19, Russian-backed government forces have been battering opposition-held parts of Daraa province with air strikes and barrel bombs, simultaneously calling on rebels to surrender.

Syrian state news agency SANA has reported that rebels in three towns in Daraa's eastern countryside had already agreed to a regime takeover over the last two days.

On Friday, it carried preliminary reports that rebels in four more towns had "agreed to hand over their weapons... and reconcile."

Syria's army on Friday organized a press tour of recently recaptured towns in the south, including Al-Soura.

A military commander, speaking on condition of anonymity, told journalists that the army's advance left opposition fighters with "no choice" but to surrender.

"The terrorist groups are heading towards settlement and reconciliation," the commander said.

The strategy is one the government and its Russian ally have used across Syria: bombing, isolating rebel towns with ground attacks, and ultimately securing their surrender.

They have already divided rebel territory in the south -- which forms a rough U-shape spanning Daraa and neighboring Quneitra province -- into several chunks.

Lebanon's Hizbullah, which has fought alongside Syrian regime forces in the south, said on Friday that rebels were "collapsing."

"Many of these groups are reassessing, starting to ask for settlements and entering into reconciliation deals," Hizbullah chief Sayyed Hassan Nasrallah said.

"We are facing a very big victory in southern Syria," he said.

The Syrian Observatory for Human Rights, a Britain-based war monitor, said on Friday that as many as eight towns were in negotiations over a potential regime takeover.

"There are talks between the Russians on one side and opposition factions on the other, through local mediators, over the fate of eight towns in Daraa's countryside," it said.

"Most of them appear willing to reconcile with the regime, which will see rebel fighters hand over their heavy weapons," he said.

Syrian and Russian warplanes on Friday continued air strikes across Daraa province and the provincial capital of the same name, the Observatory said.

Nearly 100 civilians have been killed since the assault began a week ago, the monitor said.

The United Nations says around 66,000 people have fled their homes, many of them towards the border with Jordan, which remains closed.