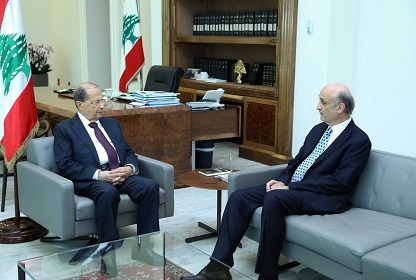 Lebanese Forces leader Samir Geagea announced Monday that he agreed with President Michel Aoun on a “roadmap” during anticipated talks at the Baabda Palace.

“I told President Aoun that he can count on the LF and we also agreed on a roadmap,” Geagea said after the meeting.

“We tackled the cabinet formation issue and we did not put a veto on anyone and we also won't accept that a veto be put on us,” the LF leader added.

Geagea however noted that he will not discuss “numbers and shares” through the media.

Noting that the LF “differentiates between President Aoun and the Free Patriotic Movement,” Geagea revealed that his party's “communication” with FPM chief MP Jebran Bassil “will be resumed.”

“What connects us to the FPM is not a document or an agreement bur rather actions,” the LF leader added, stressing his party's “ultimate support” for Aoun's presidential tenure.

Responding to a reporter's question, Geagea said: “Some believe that our support for the presidential tenure should be support for everything the FPM's ministers do.”

The LF leader concluded by reassuring that “the atmosphere is promising” and that the steps agreed with Aoun will be put into action.