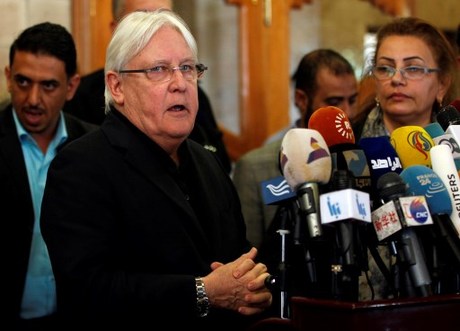 The U.N. envoy for Yemen met with the country's embattled president Tuesday in another round of talks aimed at brokering a truce between the government and rebels.

The internationally-recognized Hadi government is allied with a Saudi-led military coalition in a war against Yemen's Iran-backed Shiite Huthi rebels.

Griffiths told state media that he and the president had discussed the possible resumption of political negotiations between Yemen's government and rebels.

He also floated the idea of "prisoners being released and exchanged", following press reports of secret prisons in Yemen where inmates have been subject to torture.

The Yemeni government has announced it would be investigating prisons in areas under its control.

The government, backed by the United Arab Emirates (UAE), Saudi Arabia and their regional allies, is battling the northern-based Huthis for control of the impoverished country.

The conflict is now centered on the Red Sea city of Hodeida, home to the country's most valuable port and controlled by the Huthis.

On June 13, Yemeni forces supported on the ground by UAE troops, launched a major offensive to retake Hodeida, the entry point for some 70 percent of imports to a country where eight million people face imminent famine.

On July 1, the UAE announced it had halted the offensive to give a chance to U.N. diplomatic efforts.

Griffiths on Thursday briefed the U.N. Security Council on his latest talks in Yemen, after what he said was a "fruitful" discussion with rebel chief Abdulmalik al-Huthi, in a rare confirmation of direct talks between the two.

No truce has yet been reached between the government and rebels on Hodeida.

Nearly 10,000 people have been killed in Yemen since Saudi Arabia and its allies intervened in the country's civil conflict in 2015 -- including 2,200 children.