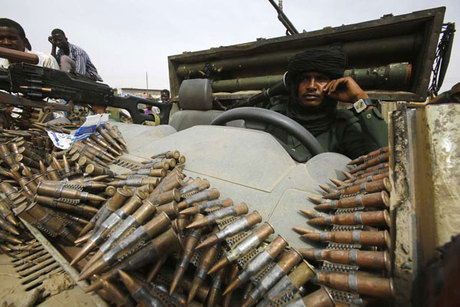 The UN Security Council is expected to vote this week on imposing an arms embargo against South Sudan, a US proposal which follows a power-sharing agreement between warring leaders.

The United States is South Sudan's biggest aid provider, and was a major backer of its 2011 independence from Sudan.

But patience from South Sudan's foreign allies has worn out after countless failed efforts to bring peace to the country, now in its fifth year of a war where targeted ethnic killings, gang rapes and other atrocities have occurred.

An early draft resolution, seen Tuesday by AFP, underlines "a deep concern" of the Security Council "in the face of the failure of South Sudanese leaders to end hostilities and flagrant violations."

The draft US text would establish an arms embargo for South Sudan until May 31, 2019.

It allows UN member states to destroy or neutralize any cargo of weapons prohibited under the embargo.

The document would also renew for a year sanctions imposed on South Sudan.

In the Security Council several countries, including Russia, China, and Ethiopia, are not keen to strengthen the sanctions so as not to jeopardize mediation led by the East African regional organization IGAD, and which led to Saturday's agreement on the ground.

Under that deal, rebel leader Riek Machar would return to his position as vice-president, pending further negotiations.

In contrast, the United States and European allies stress the fragility of the agreement and deem it necessary to maintain maximum pressure to advance towards peace, diplomats say.

Two years after separating from Sudan in 2011, oil-rich South Sudan plunged into a war that has since killed tens of thousands of people and displaced four million, after President Salva Kiir accused his then-deputy Machar of plotting a coup.