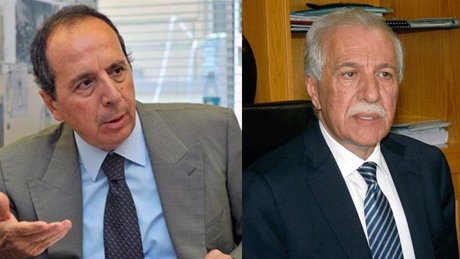 Caretaker Agriculture Minister Ghazi Zoaiter of the AMAL Movement hit back Sunday at remarks by MP Jamil al-Sayyed, the controversial ex-General Security chief who was elected a lawmaker for the Baalbek-Hermel region after allying with Hizbullah in the May parliamentary polls.

“Those whom you claimed are the Shiites of the state are the Shiites of the resistance and are the Lebanese of all sects. We did not perform our duty when we refrained from responding to you several times... Unfortunately, it turned out that the 'son of the state' wants those who are like him to stand by him and we are not like him,” Zoaiter tweeted.

“The Shiites of the resistance performed their duty fully, in the South and against terrorism in the Bekaa! The Shiites of the state gave a lot to the South, but the Bekaa was not given what it deserves! Today the Bekaa is a ticking time bomb, so do not lose it,” al-Sayyed warned.

what is the difference really:) They are both scum.

A thief slugging it out with a murderer

There is no such thing as shia of the state or the shia of the resistance. They are all the shia of iran; a group of drug dealers, car thieves, terrorists, and murderers.

One of them is a Zionist, obviously.

There's no such thing as a Resistance despite the ongoing Iranian paid marketing , and there's no State as we've witnessed since our birth. The heads of states, PMs and Parliament speakers are crooks.

No honor between thieves.