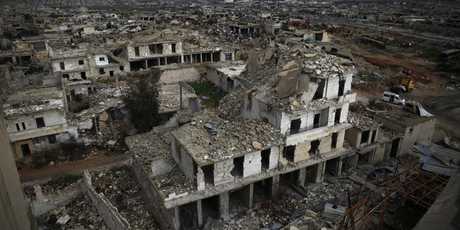 Syrian state media had accused Israel of bombing a military position in Aleppo province late Sunday, in what would be a rare Israeli strike so far north in the war-ravaged country.

The Syrian Observatory for Human Rights, a Britain-based war monitor, said the base was being used by the Syrian regime's arch-ally Iran.

He said those killed included at least six Syrians, but could not specify the nationalities of the remaining fighters.

The position is a logistics hub used to provide equipment and food to pro-regime forces fighting at nearby fronts, but it did not store weapons, Abdel Rahman said.

Tehran has dispatched military forces to bolster Syrian President Bashar al-Assad's efforts to crush a seven-year uprising against his rule.

Assad has said the forces are advisors but denied the presence of Iranian fighters on Syrian territory.

Late Sunday, state news agency SANA said Israeli missiles had hit near a strategic air base, but said there were no casualties.

"The Zionist enemy... targeted with its missiles one of our military positions north of the Neirab military airport, but the damage was only material," it said, citing a military source.

The Israeli military declined to comment on the reports.

The attack is the third suspected Israeli strike on Syria this month alone.

Damascus accused its arch-enemy of striking a military position in central Syria on July 8 and Israel said it had hit three military posts in the country a few days later.

Suspected Israeli strikes usually hit army positions near Damascus and in the central provinces of Homs and Hama, but have rarely struck as far north as Aleppo.

Israel has repeatedly warned it will not tolerate an entrenched presence of its archfoe Iran in neighbouring Syria.

In May, it carried out an unprecedented wave of strikes against what it said were dozens of Iranian military targets in Syria.

Israel has been on high alert in recent weeks as Assad's forces fight to retake parts of southern Syria bordering the Israeli-annexed Golan Heights.

After taking a majority of the key province of Daraa, government troops are waging an offensive on the adjacent province of Quneitra which remains mostly in rebel hands.

They began heavily bombing the area early on Sunday morning and air strikes continued there on Monday, according to the Observatory.

for every 1000 rockets from israel, they are edging closer to the end of tel abib. the recistance axis will strike at the heart of Israel.

I hope this recistance axis of which you speak does a better job than the resistance axis who's head hides undergrounds afraid for his life.

Yes Patriot # 10 when will they reach the heart of Israel cause so far they have not scratched to the toe of Israel not to mention its derriere....?

Israel says it wants to stop entrenched resistance forces, but the Resistance is already entrenched, Israel are in a paranoid state, they know no matter how many times they strike, the armaments will still keep flowing in.

We also know for a fact that 50% of all Jews in Israel are from Russia, and Russia will not interfeer in a confrontation between Israel and Iran.

Russia are in Syria to protect it's own interests, and so is Iran.
Iran is not going to quit their presence at the end of the victory, because Israel says so.

Blavo blavo mystic, now go drink your milk and take a nap. Remember wash well behind both ears and brush your teeth too. Oh yeah the fairy godmother may come and visit later on so don't lose that tooth!
Some people children, poor kid probably spends his time between video games and listening to martyrs music....

I have the utmost respect and admiration for Mrs. Mystic because it has good ideas.