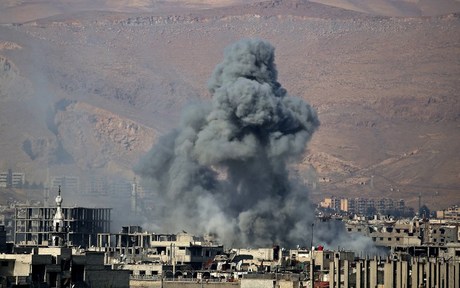 Air strikes on Tuesday killed more than a dozen civilians in parts of Syria's south near the Israeli-occupied Golan Heights, a war monitor said.

The Damascus regime has been pounding the southwestern province of Quneitra since Sunday in a bid to retake it from rebels, after winning back most of the neighbouring governorate of Daraa in less than a month.

The Syrian Observatory for Human Rights said air strikes killed 14 civilians in the village of Ain al-Tina on Quneitra's border with Daraa on Tuesday morning.

"They were all displaced from other areas. They included five children and three women," Observatory chief Rami Abdel Rahman said.

It was not immediately clear whether the strikes were carried out by the regime or its Russian ally, the Britain-based monitor said.

The monitor determines who carried out strikes based on the type of aircraft and munitions used, locations and flight patterns.

The civilians had reportedly been taking shelter in a large building in Ain al-Tina.

In the west of the adjacent province of Daraa, Russian air raids also killed one civilian near the village of Al-Aliya, the Observatory said.

"Since Tuesday morning, heavy Russian air strikes and barrel bombs dropped by the regime have been targeting an area straddling Quneitra and Daraa," Abdel Rahman said.

Hayat Tahrir al-Sham, a group led by Syria's former Al-Qaeda affiliate, is present in that area, he said.

HTS jihadists are not included in a ceasefire between regime and rebels in Daraa announced earlier this month, which has allowed the regime to retake control of more than 90 percent of the province.

President Bashar al-Assad's regime has advanced in Daraa thanks to a deadly bombardment campaign since June 19, along with Russia-brokered deals between opposition fighters and the regime.

In Quneitra on Monday, rebels in at least five towns raised the national flag, seeking a similar agreement with the regime, Abdel Rahman said.

"Rebel factions in these towns have stopped fighting to avoid bombardment and destruction," he said.

In two days since Sunday, at least 43 regime fighters have been killed in both Daraa and Quneitra, while 48 jihadists and rebels have lost their lives, the Observatory said.

More than 350,000 people have been killed and millions displaced by Syria's war since it started in 2011 with a brutal crackdown on anti-government protests.

Probably the Russian Air Force or else Israel would have shot them down. These two communicate on everything.