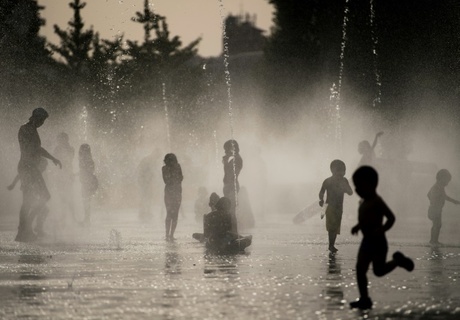 Europe baked in near-record temperatures on Monday but some respite was on the horizon after weeks of nonstop sunshine as people come to terms with what may prove to be the region's new normal in an era of climate change.

Here is a roundup of recent developments:

- France nearing a peak -Temperatures were expected to peak at around 37 degrees Celsius (99 degrees Fahrenheit) in southern France on Monday, while the north is due to be hotter on Tuesday. On Saturday, they hit their highest levels since a 2003 heatwave killed thousands of mainly elderly people.

Health Minister Agnes Buzyn said people had to take proper care to cope with the heat and warned that everyone had to adapt.

"You need to drink a lot, but also to eat and take salt," Buzyn said.

"We are probably going to adapt our warnings in the coming years, because this is something we haven't been seeing until now."

- Spain fires under control- In Spain the death toll rose to seven after a 40-year-old German man on the Camino de Santiago (Way of Saint James) pilgrimage succumbed to heat stroke on Sunday in the eastern region of Extremadura, a spokeswoman for Spain's Guardia Civil police force told AFP.

Firefighters, benefitting from calmer winds, were meanwhile gaining control of a wildfire in the southwestern province of Huelva, just across the border from the Algarve in southern Portugal.

Temperatures remained high, especially in the southeast where they were forecast to hit 40-42 C.

- Portugal fires - In Portugal, temperatures have eased slightly but not by enough to make the job of some 1,100 firefighters aided by 160 soldiers in Monchique any easier pending the expected arrival of two Spanish Canadair firefighting planes.

Monchique, in southern Portugal, was shrouded in thick clouds of smoke early Monday after the authorities evacuated several houses overnight, with 24 people injured, one seriously.

Rescue officials initially expressed optimism they were getting the better of the raging fire. But in a new update they appeared less confident. Abel Gomes, one of the heads of the civil protection service, said the situation "had unfortunately changed".

"We have witnessed flare-ups of great intensity" fanned by strong winds, he added.

The weather service said that after Saturday's peak, temperatures were back below 45 C and should continue lower over the next few days.

- Fresh spike in Germany -  Germany expects a fresh spike mid-week to around 39 C before temperatures ease, with official figures showing the average for April-July running 3.6 degrees higher than the 1961-1990 reference period.

Farmers continued to plead for help, with the president of Germany's farmers' association, Joachim Rukwied, saying a billion euros ($1.15 billion) in government aid may be necessary as crop failure rates hit 70 percent in some areas.

More than a million children returned to school on Monday in three German states -– Rhineland-Palatinate, Saarland and Hesse -- but some were allowed to go home early because of the heatwave.

- British islands in trouble -Britain saw continued hot weather in the south with a maximum of 32 C but it was cooler and cloudier in the north.

Reports said the persistent lack of rain has hit the country's more remote islands, such as Lundy in the Bristol Channel -- with a population in the dozens -- which is now reliant on bottled water from the mainland after local supplies ran dry.

Arran in Scotland, the Isle of Scilly in southwest England and Jersey in the Channel Islands have all asked people to cut water consumption, the Daily Express report added.

- Netherlands -The heatwave has hit the low-lying Netherlands hard like many other countries but no one thought it could be a threat to its world-famous system of dams and canals designed to keep the sea at bay.

River levels have fallen so low that seawater is seeping in to waterways, and the Rijkswaterstaat, which manages the national water system, has been opening barrages inland to flush it out.

Meanwhile in the city of Utrecht, the clock hands on the famous medieval Dom Tower have stood still since Friday at 11:23 after the hot temperatures warped the mechanism.

The European Association of Fruit and Vegetable Processors (Profel), based in neighbouring Belgium, lamented the effect of a third straight year of prolonged drought conditions.

"The extreme weather conditions experienced around Europe can lead to losses on the fields in both quality and quantity," a Profel statement said, warning of a "severe shortage in supplies in the coming period for all vegetable crops."

- Greek fire toll rises to 91 -Greece was a little cooler but the toll in last month's wildfire northeast of Athens rose to 91 as a 95-year-old woman died of her injuries, officials said.

Another 36 people remain hospitalised after the July 23 disaster, six of them in critical condition.

- Scorching Scandinavia -Wildfires that have been raging across Sweden are abating, emergency services SOS Alarm said, adding that the blazes were down to eight on Monday.

The nation's far north saw heavy rainfall on Monday, authorities said, after record heat in the Arctic Circle triggered drought and wildfires. Drought is persisting in many other areas of the country.

In neighbouring Finland, a Helsinki supermarket opened its doors overnight Saturday to customers seeking refuge from the heat.

In a video released on Facebook, the K-Supermarket showed customers chilling on mattresses and in sleeping bags.